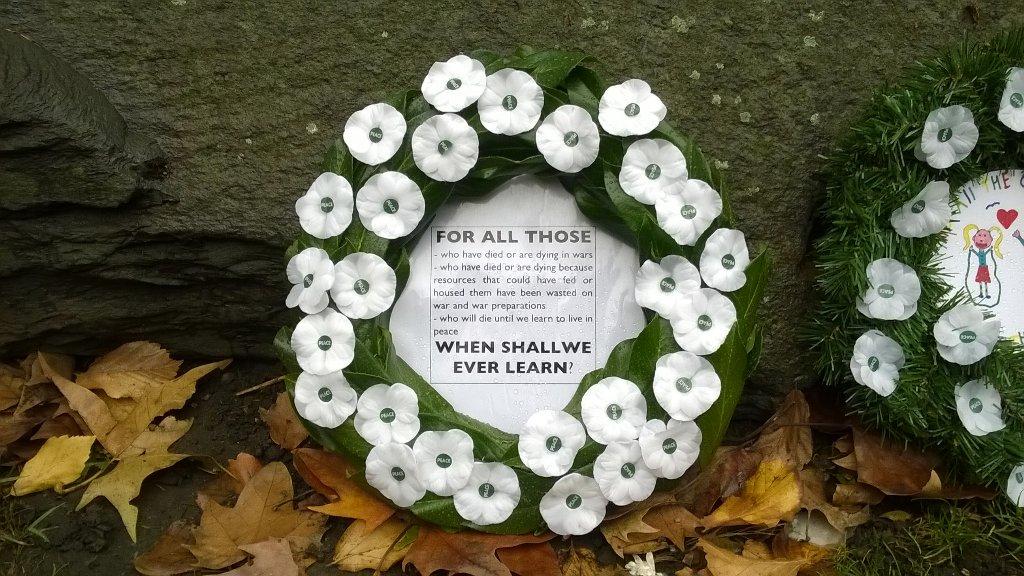 The Peace Pledge Union (PPU) has welcomed news that the German president may be invited to the Remembrance Day ceremony at the Cenotaph in London on Sunday 11 November. They said it was "a small step" in the right direction but that much more needs to be done to ensure that Remembrance Day reflects the realities of war.

The PPU, known for distributing white poppies at remembrance time, reiterated their call for remembrance for all victims of war of all nationalities, including civilians as well as members of armed forces.

White poppies stand for remembrance for all victims of war, a commitment to peace and a rejection of attempts to glamorise or sanitise war.

In contrast, the Royal British Legion, who produce red poppies, say that remembrance should be only for members of British and allied armed forces.

However, the PPU welcomed the news that the British Legion is supporting the idea of inviting the German President, Frank-Walter Steinmeier, to the Cenotaph ceremony. They urged the Legion to go further and embrace remembrance for people of all nationalities.

Retired colonel and militarist commentator Richard Kemp has predictably opposed the idea of inviting Steinmeier, saying it shouldn't happen if it "upsets a single veteran". The PPU's Albert Beale debated the issue with Kemp on LBC Radio last night (Monday 24 September), pointing out that war affects people of all nationalities and that we cannot build peace by imagining that some people's lives are less worthy of remembrance than others because of their nationality.

The PPU noted that, even with the German president present, the Cenotaph ceremony remains a highly militarised and nationalistic event, bulit on the pretence that all wars fought by UK government troops have been justified and have benefitted the British people and the world.

The Peace Pledge Union, along with other peace and human rights groups that make up the First World War Peace Forum, will hold an Alternative Remembrance Sunday Ceremony in Tavistock Square, London at 1pm on Sunday 11 November.

The plan to invite Steinmeier to the Cenotaph has not yet been confirmed. In Germany, the role of president is largely ceremonial, in some ways similar to the monarchy in Britain, whereas the German chancellor's role is comparable to that of a British prime minister.