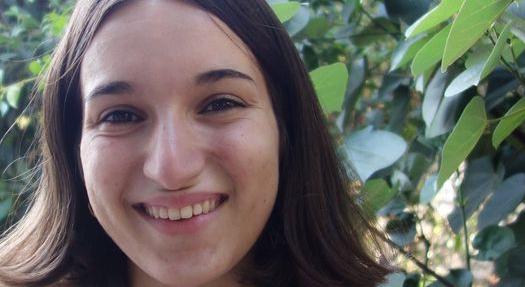 Messages of support have been sent to hundreds of conscientious objectors and peace activists in prison around the world.

Today, 1st December – as well as being World AIDS Day – is also Prisoners for Peace Day, when calls are amplified for the release of people imprisoned for their support for nonviolence.

They include Shahar Peretz (pictured), a 19-year-old Israeli, who was imprisoned in August for refusing to join the Israeli armed forces. She is about to begin her fourth term of imprisonment - because each time she is released from prison, she again refuses to enlist.

A number of countries still conscript people into armed forces and some imprison those who refuse to join or to fight. There are conscientious objectors in prison in places including Singapore, South Korea, Ambazonia, Israel and Eritrea.

There are also likely to be unknown conscientious objectors in other countries, such as North Korea, which do not provide information on the issue.

In addition, there are people who have been locked up for their nonviolent peace activism. Seven Catholics in the US, who were imprisoned in 2019 after attempting to disarm weapons, were not finally released until last week.

In the UK, the Peace Pledge Union has today urged their members and allies to take the opportunity to send a message of support to one or more people imprisoned for peace somewhere in the world.

Prisoners for Peace Day is co-ordinated by War Resisters' International (WRI), of which the Peace Pledge Union is the British section.

Shahar Peretz said that her “decision not to wear a uniform or hold a gun” had been a very hard decision in a militarised country in which children are told form a young age that they will join the Israeli Defence Force (IDF) when they turn 18.

She said that she wanted to be as public as possible in her conscientious objection, despite the stigma that this would lead to, so that more people would realise that there are many Israelis who object to joining the Israeli armed forces and to what they do.

Shahar's doubts about accepting conscription began when she met Palestinian young people at a summer camp when she was younger. She was worried that she could one day be standing next to the same young people while holding a gun and deciding if they could go through a checkpoint.

Shahar Peretz was initially sentenced to 28 days of imprisonment in August for refusing to join the IDF, but after being released she continued to refuse to join. She has now undergone this process three times and is expected to begin her fourth sentence shortly. She spent her nineteenth birthday in prison.

After being released the first time, Shahar said that the experience had not removed her determination to refuse to fight. "In military prison, I dealt daily with my choice to refuse to enlist in the army," she explained.

Shahar added, "This meant not only dealing with being physically imprisoned, kept apart from family and friends, and my lack of freedom, but also my encounters with other female prisoners and guards. The reason why I'm in prison comes every time someone new comes in and always creates conversations and arguments. And despite the difficulty, lack of consent and racism that come up in these conversations, they always remind me why my act of refusal is so right and so important in this reality."

Meanwhile, there has been some good news for another Israeli conscientious objector, 19-year-old Eran Aviv, who has now been exempted from being in the armed forces – but he has already spent 114 days behind bars.

However, the list of known Prisoners for Peace (maintained by War Resisters' International) includes large numbers of people in jail in Singapore, Ambazonia and Eritrea, along with a recognition that there are likely to be many other Prisoners for Peace whose names are now known.

To send a supportive message to someone imprisoned for peace, you can find the list of known Prisoners for Peace (and contact details) here.