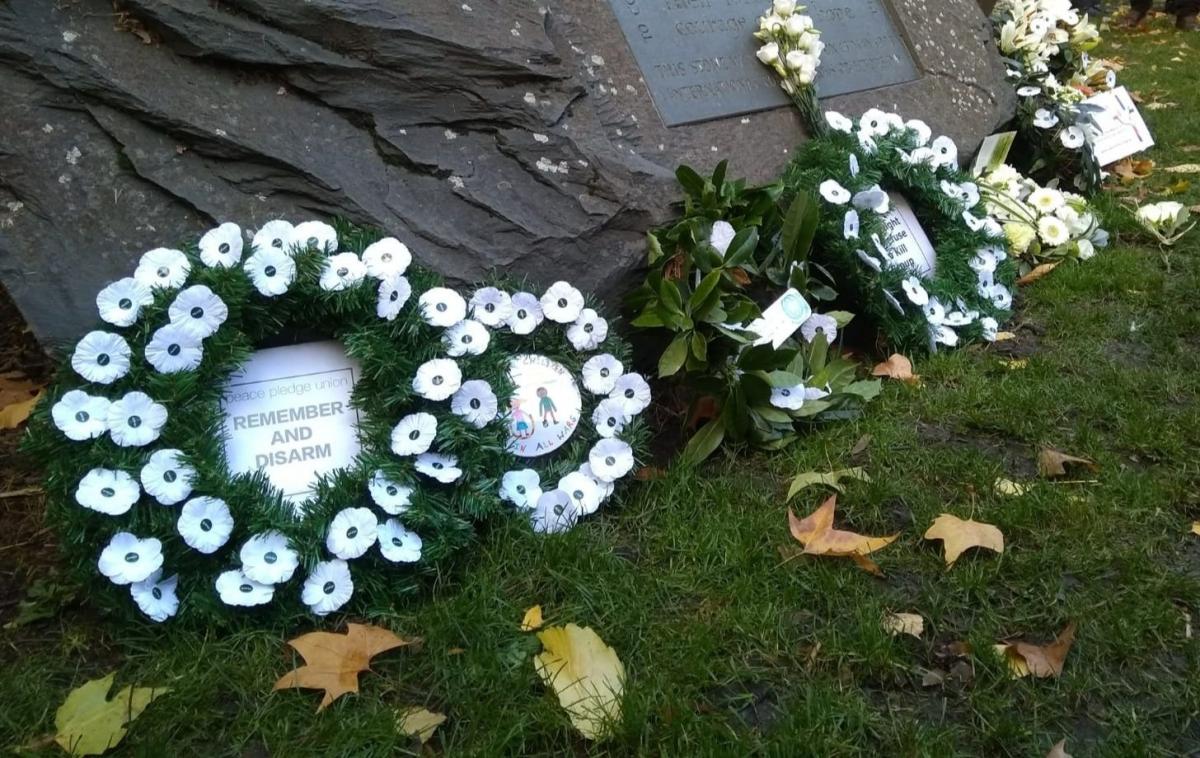 White poppy wreaths have been laid at events around Britain in remembrance of all victims of war. They also represent a commitment to remember the dead by working for peace.

In London, around 200 people gathered in Tavistock Square to observe two minutes' silence and to lay wreaths of white poppies out of remembrance for all victims of war, both civilians and combatants of all nationalities. They made a commitment to work for peace and to resist war.

The ceremony in London was organised by the Peace Pledge Union and ten other organisations, which together make up the First World War Peace Forum.

Pariticipants included people of varied backgrounds, beliefs and ages, including former members of the armed forces.

The events contrast with government-backed Remembrance events today, at which ministers have laid wreaths for the war dead while continuing to sell weapons, maintaining the seventh highest military budget in the world and slashing the welfare state on which veterans and others rely.

White poppies represent remembrance for all victims of war, a commitment to peace and a rejection of militarism. Over 120,000 poppies have been sold this year, by the Peace Pledge Union. This figure is the highest for any year since white poppies were introduced, in 1933.

Following the ceremony in London, an event called Peaceful Futures is taking place this afternoon in nearby Friends House. It features films, performances, poetry readings and stalls exploring issues of peace and remembrance, alongside a children's programme run by the Woodcraft Folk.

Meanwhile, members of Veterans for Peace are laying a wreath of red and white poppies at the Cenotaph.

At the London ceremony, actor Michael Mears read from a speech by First World War pacifist Clifford Allen, delivered shortly after the end of the war and after he had been released from solitary confinement.

Others speakers included Marigold Bentley of Quaker Peace & Social Witness, who has worked on peacebuilding in Northern Ireland, the Middle East and elsewhere.

"War is a failure. Modern war is a failure on a massive scale... Humanity may be capable of terrible things but there are always people protesting, challenging, making policy to make the world a better place."

"I came to remember all victims of war, including by grandfather, who fought in both world wars. I found the ceremony moving without being sentimental. The commitment to peace was strong and appropriate to the occasion of Remembrance Sunday."