Johnson and Starmer romanticise the military on Armed Forces Day 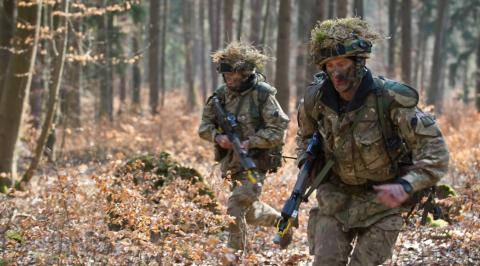 Johnson and Starmer romanticise the military on Armed Forces Day

Party leaders have been accused of promoting a simplistic and misleading image of armed force.

Labour leader Keir Starmer posted a video message on social media yesterday (26 June) to mark Armed Forces Day. He claimed that, "Around the world, British forces personnel are at the heart of delivering peace”. He said nothing to explain how he thinks this happens.

Meanwhile, Prime Minister Boris Johnson described the British armed forces as the “best-trained, the best-led and the most dedicated service personnel you’ll find anywhere in the world”.

The Peace Pledge Union (PPU) pointed out that the majority of actions undertaken by the armed forces in the last 20 years – including the wars in Iraq, Afghanistan, Libya and Syria – had been seen as disastrous and counter-productive by a significant percentage of the British people.

There were few in-person events for Armed Forces Day this year, due to the Covid pandemic, but ministers and military leaders used the day as an opportunity to promote militarist messages.

Meanwhile, Peace Pledge Union members and allies challenged Armed Forces Day on social media and in letters to local newspapers. Huddersfield Quakers held a vigil to protest against the sale of arms and provision of military training to Saudi Arabia.

This year, Armed Forces Day was preceded by "One Britain, One Nation" Day, with schools encouraged to organise children in singing supposedly patriotic songs. Anecdotal evidence suggests that few schools did so.

The PPU noted that the government talks of respect for armed forces personnel and veterans, but presides over a situation in which around 13,000 veterans are estimated to be homeless in the UK and many veterans cannot access mental health support because of cuts to services.

Both Johnson and Starmer had emphasised the role that some troops had played in the Covid pandemic, avoiding the reality that this is secondary to the armed forces’ core purpose of fighting and preparing for war. The PPU welcomes the work of everyone who has helped to tackle Covid, including forces personnel, but believes that these people’s skills and dedicated could be put to better use as part of well-funded civilian emergency services.

The video message from Mike Wigston, head of the Royal Air Force, for example, did not mention the major role played by the RAF in training the Saudi pilots who are bombing civilians in Yemen.

Armed Forces Day was launched in 2009 at a time when the majority of the British public was opposed to the wars in Iraq and Afghanistan. It was one of a number of measures designed to boost support for war and armed force. The PPU describes it as an example of everyday militarism.