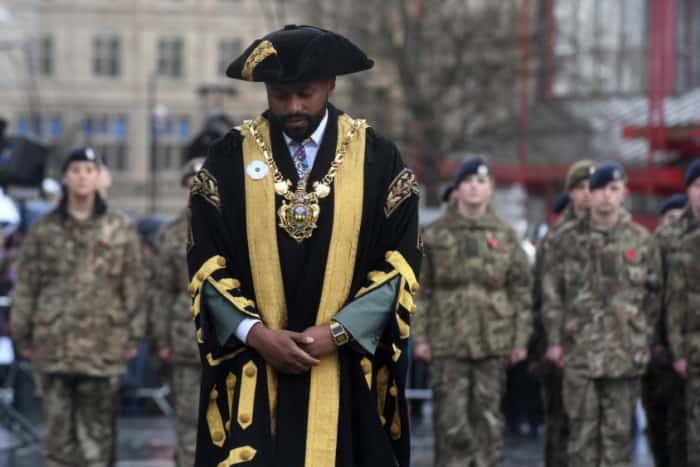 The Peace Pledge Union has written to the Lord Mayors of Sheffield and Bristol to praise their decision to wear white poppies at the official Remembrance Day events in their cities.

Magid Magid, the Lord Mayor of Sheffield, wore only a white poppy while laying wreaths of both red and white poppies to remember people killed in war. Earlier, Magid had urged the government to mark Remembrance Day by scrapping the renewal of the Trident nuclear weapons system and ending arms sales to Israel and Saudi Arabia.

Despite controversy, it quickly became clear that there was widespread support for Magid's decision in Sheffield. On Remembrance Sunday, the Yorkshire Post online news story was headlined, "Magid Magid criticised for wearing white poppy at Armistice service".

But in the light of the response, the Yorkshire Post headline changed to, "Magid Magid receives groundswell of praise in wake of white poppy criticism".

A petition to remove Magid from office on the grounds of his attitude to Remembrance Day has attracted only 20 signatures.

Meanwhile, Cleo Lake, the Lord Mayor of Bristol, wore a white poppy alongside a red poppy and a black poppy as she carried out her official duties on Remembrance Day.

White poppies, which are supplied by the Peace Pledge Union, represent remembrance for all victims of war of all nationalities, a commitment to peace and a rejection of militarism.

In contrast, the Royal British Legion, who produce red poppies, insist that remembrance should be concerned only with British and allied armed forces personnel. The Legion also state that red poppies demonstrate “support for the armed forces”.

Four days before Remembrance Day, Magid Magid posed for a photograph wearing a white poppy on his hat and a T-shirt saying, “What happened to ‘never again’?”.

Magid wrote, “When politicians and powerful business interests sat in comfortable chairs on comfier salaries in distant offices, decide to impose war on the masses - it is not them but the children and loved ones of working people who are compelled to make the ultimate sacrifice.”

In response to criticism, he insisted that he had supported events in Sheffield to raise money for charities for veterans. But he also insisted that the government should “not allow military veterans to have to rely on charity” but should provide support through the state.

In Bristol, Cleo Lake tweeted, “I was proud to wear a red, a black and a white poppy today at our Remembrance Day service in Bristol.”

Symon Hill of the Peace Pledge Union said, “There is enormous social and political pressure to conform to establishment expectations when it comes to issues of war and peace. This is even more so for those in the public eye such as politicians and sportspeople.

“In the light of this, we would like to thank Magid Magid and Cleo Lake for having the courage to wear a white poppy as they officiated at Remembrance Day events, sticking by their principles of remembering all victims of war of all nationalities, and demonstrating a commitment to peace.”