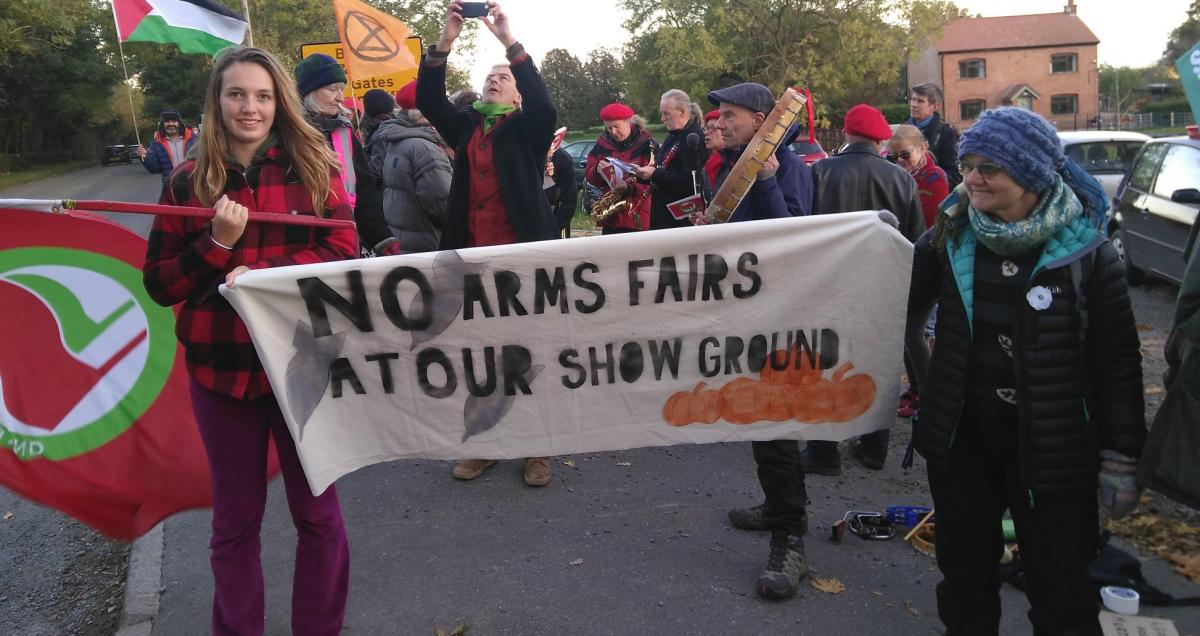 Arms dealers at an event in Worcestershire today have been greeted by protests and nonviolent direct action.

Early in the day, an entrance to the arms fair was nonviolently blockaded by Extinction Rebellion (XR) who drew attention to the links between war and climate destruction. The blockade prevented large numbers of attenders from attending the beginning of the event.

XR shortly afterwards moved the position of their blockade to ensure that they did not impede access to a Covid 19 vaccination centre near the arms fair.

In the afternoon, people gathered in central Malvern displaying banners and handing out leaflets to passers-by. Many drivers sounded their horns in support, easily outnumbering the few who shouted insults.

The Stroud Red Band performed peace-related songs as part of their demonstration, before participants heard short speeches from the many groups involved. As well as the two local groups who had organised the protests, there were speakers from the Peace Pledge Union, Pax Christi, Birmingham Stop the War Coalition and the Quakers.

Several speakers drew links between war and climate change, encouraging peace and climate campaigners to work together and pointing out that armed forces around the world are exempt from international agreements about emissions reductions. Many participants wore white poppies in remembrance of victims of war and as a commitment to peace.

They held two minutes’ silence in memory of victims of the arms trade before crossing the road to lay a wreath of white poppies at the town’s war memorial.

They then joined other campaigners in demonstrating outside the arms fair until it finished at the end of the day.

The Malvern arms fair is the fourth arms fair to take place in the UK in less than two months, following similar events in London, Farnborough and Liverpool. All faced protests.

While demonstrations continued in Malvern today, people outside the COP26 summit in Glasgow demonstrated against the exemption that allows the world’s armed forces not to count their carbon emissions or be included in emission reduction targets.