Man walks from Lancaster to London to join Alternative Remembrance 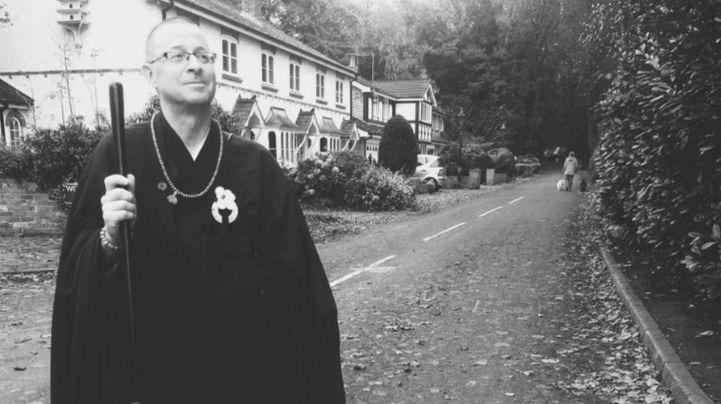 Man walks from Lancaster to London to join Alternative Remembrance

Buddhist priest Jitei White is arriving in London this weekend after walking from Lancaster on a 'Great Walk for Peace'.

He has been distributing white poppies on his walk south and promoting peace through conversation and reflection.

After joining the official Remembrance ceremony at the Cenotaph, he will join the Alternative Remembrance Sunday Ceremony at 1.00pm in Tavistock Square, near Euston.

"I am getting progressively more adventurous," said Jitei before he started walking. "The idea is to speak to as many people as I can." He is keen to combine inner peace, social peace and global peace.

People of many beliefs, backgrounds and ages are expected at the Altrernative Remembrance Sunday Ceremony. It is organised by the First World War Peace Forum, which unites various peace and human rights groups including the Peace Pledge Union (PPU).

White poppy wreaths will be laid at the ceremony in remembrance of all victims of war of all nationalities. Those present will be invited to make a commitment to peace.

Similar events will be held at other towns and cities in Britain.

White poppies represent remembrance for all victims of war, a commitment to peace and a rejection of miltiarism. They can be bought at over 100 outlets around Britain.