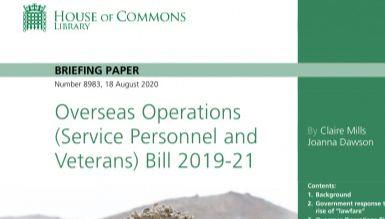 The Peace Pledge Union has called on MPs to vote aganist the Overseas Operations Bill when it comes before Parliament on Wednesday 23rd September.

The PPU said that the bill threatens the rights of victims of the UK armed forces, including forces personnel who have themselves been mistreated by their superiors.

The bill introduces a “presumption against prosecution” for UK forces personnel accused of war-related crimes if five years or more have passed since the time the allegations refer to. But the PPU said that the armed forces are routinely placed beyond scrutiny and that the bill will only make them even less accountable to the public.

They pointed out that British armed forces personnel are almost never convicted of war-related crimes, and that when they are it usually involves only junior personnel rather than those responsible for big decisions. This is despite years of evidence of abuse, torture and the killing of civilians in Afghanistan, Iraq and elsewhere. Media investigations in the Sunday Times and BBC Panorama have revealed fresh evidence of such incidents within the last year.

By exempting armed forces personnel from certain human rights principles, the bill could also make it harder for military veterans to bring legal claims against the armed forces and the Ministry of Defence.

The PPU welcomed comments from Labour's Shadow Defence Secretary John Healey, in which he warned that the bill could lead to serious crimes not being addressed. But they urged him, and MPs of all parties, to go further in ensuring that the armed forces are held to account.

Critics of the bill include military veterans and lawyers as well as groups concerned with peace and human rights.

The Judge Advocate General (the most senior judge in the military courts system) wrote in a letter leaked to the media in June that he had “significant misgivings” about the bill. The Conservative chairman of the Defence Select Committee, Tobias Ellwood MP, has written a list of questions about the bill, casting doubt on it effectiveness.

The Centre for Military Justice said that the bill “reads like a piece of legislation that has been prepared mainly for the purpose of seeking lazy headlines”. They added that long delays in investigations were due to the failure of the Royal Military Police and the “chain of command” to investigate allegations properly at the time they are made.

The PPU emphasised that they oppose all war, regardless of whether it is technically legal or illegal. They warned that this bill will make armed forces even less accountable to law and democratic scrutiny. The armed forces are already treated as being in many ways outside the law, able to run their own criminal courts and their own police force.

The PPU added that the recent arrest of British soldier Ahmed Al-Babati, for peacefully protesting against the UK's role in the war in Yemen, is a reminder that the armed forces routinely abuse the human rights of their own members. They have offered to support Al-Babati's right to protest if he faces court-martial.