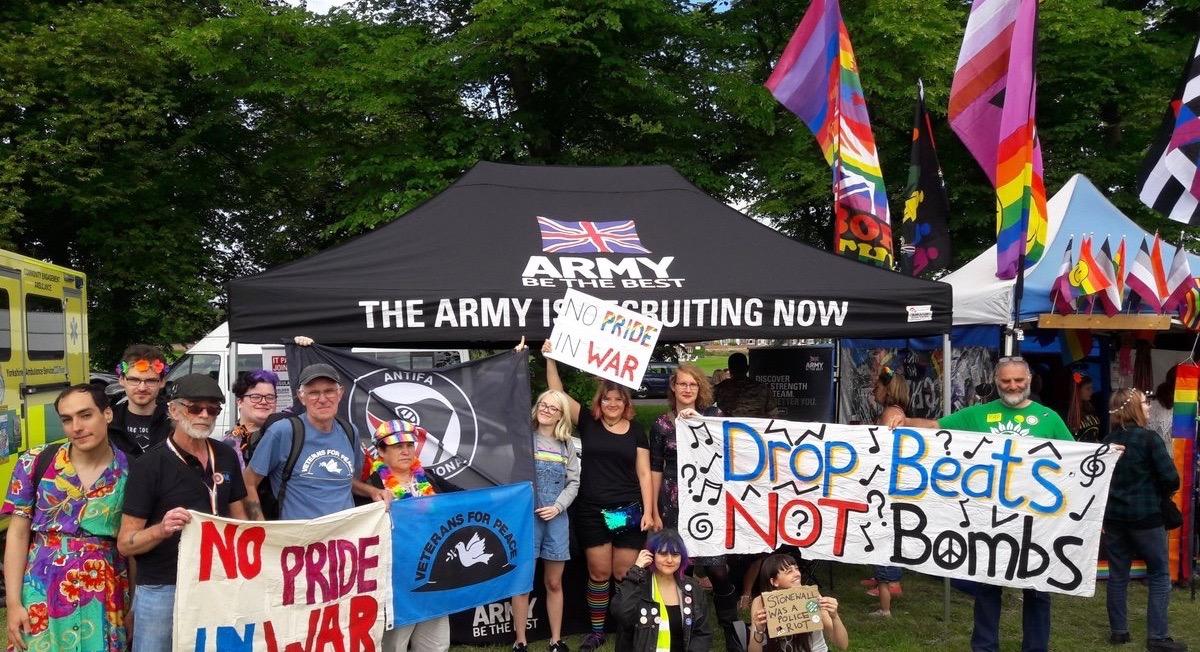 Grassroots LGBTQ campaigners in York have welcomed news that armed forces will not march in uniformed blocks at York Pride tomorrow.

There were protests in York last year when uniformed soldiers led the parade and the organisers allowed an army recruitment stall at the subsequent Pride festival (pictured above).

Members of the No Pride in War campaign emphasise that they have no problem with people who belong to the armed forces, or who work for arms companies, marching at Pride as individuals. What they object to is armed forces and arms companies misusing Pride events to pinkwash their image and misrepresent themselves as supportive of human rights.

The No Pride in War campaign is a an informal alliance of LGBTQ rights activists, human rights campaigners and peace groups such as the Peace Pledge Union.

PPU member Rachel Melly, of the York wing of No Pride in War, said, "It's a huge relief that there won't be an official military or arms company presence at York Pride this year, after a fantastic campaign last year."

However, she added, "But now we need York Pride to change their policy so the military can never again be allowed to co-opt our LGBTQ+ parade for their own pinkwashing means."

Tomorrow (8th June) will also see Pride in Blackpool taking place with sponsorship from arms dealers BAE Systems, who supply arms to regimes that imprison, torture and kill LGBTQ people, notably Saudi Arabia. A petition has been launched challenging Pride organisers in Blackpool over the sponsorship deal, while over 5,000 people have signed a similar petition urging Pride in Surrey to end BAE sponsorship. BAE is also sponsoring Portsmouth Pride.

The Peace Pledge Union suggested that BAE seem to be deliberately targeting smaller scale and newer Pride marches that might have less funding, in their latest desperate attempt to improve the company's image.

The PPU regards military involvement in Pride marches as an example of everyday militarism, through which military ideas and organisations creep into more and more areas of civilian life.

If you would like to find out more, or to join in campaigns on these issues, please feel free to contact the Peace Pledge Union at mail@ppu.org.uk or on 020 7424 9444.