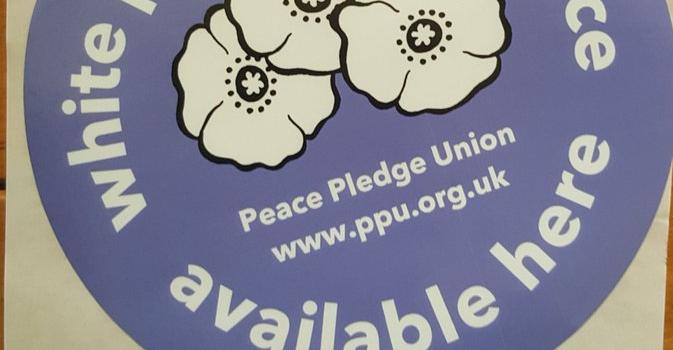 There is now at least one white poppy outlet in nearly every city and large town in Britain, as well as many smaller towns.

Launching this year's white poppy campaign in the run-up to Remembrance Sunday, the Peace Pledge Union (PPU), confirmed that there are over 150 white poppy outlets in the UK this year, more than double the number in 2016.

While most white poppy sales continue to be online, the increased number of outlets will make it easier for more people to buy a white poppy in person.

The outlets range from cafes and pubs to bookshops and museums. Several places of worship are also stocking white poppies, ranging from Chelmsford Cathedral to Manchester Buddhist Centre.

The number is likely to increase further in the coming days and weeks as more outlets come on board. In many places, shops are stocking white poppies after being approached by local groups or individuals. Many other outlets have contacted the Peace Pledge Union directly to ask to stock white poppies.

Although the number of outlets is not spread evenly around the UK, there are few large towns or cities without at least one. There are also several outlets in small towns and villages. Some cities – including Edinburgh, London and Nottingham – have several outlets.

Many of the outlets in Wales are selling both Welsh-language and English-language poppies.

White poppies will also be sold in the street in several places, including at demonstrations around the COP26 summit in Glasgow.

White poppies stand for remembrance for all victims of war, both military and civilian, of all nationalities, along with a commitment to peace and rejection of any attempt to glamourise war.

In contrast, the Royal British Legion, who produce red poppies, argue that remembrance should be limited to British and allied armed forces personnel.

White poppies have been worn in the run-up to Remembrance Day since 1933. They were founded by the Women's Co-operative Guild and have been distributed since 1981 by the Peace Pledge Union. Money raised through white poppy sales goes towards promoting nonviolent approaches to conflict and producing educational materials.

Many white poppy wearers also donate to charities supporting veterans or other victims of war. The PPU wants to see a situation in which veterans can rely on support from the state and not have to depend on charity.

The Peace Pledge Union will hold the Alternative Remembrance Sunday Ceremony in Tavistock Square, London on Sunday 14 November 2021. It is planned as a hybrid event, with anyone welcome to join either in person or remotely.

You can search for a white poppy outlet in your area or order white poppies online.

You can also read Frequently Asked Questions about white poppies.