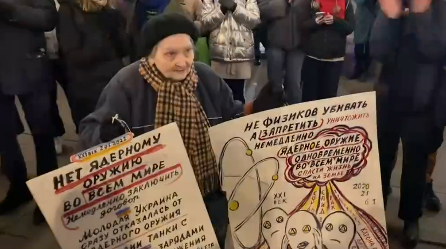 Thousands of people have been protesting across Russia since the invasion of Ukraine began a week ago.

Over 8,100 people have been arrested for anti-war protests in Russia in the last seven days, according to OVD-Info, who monitor arrests of protesters. The arrests have taken place in more than 130 cities. Over half a million people in Russia have signed petitions against the war.

The level of opposition has surprised experienced peace campaigners, commentators on Russia – and Vladimir Putin’s government.

In the UK, the Peace Pledge Union (PPU) said that the Russian peace protesters were an inspiration to the world.

Like many of the anti-war campaigners in Russia, the PPU is opposed to both Russian militarism and NATO militarism. The PPU, which is the British section of War Resisters’ International, condemned the Russian invasion of Ukraine as soon as it began on 24 February.

Boris Fedyukin, an anti-Putin campaigner in Russia, said today that prior to the invasion of Ukraine the anti-war movement in Russia had been weak but that now “it is getting stronger every day”.

The day after Putin sent troops to invade Ukraine, the invasion was denounced by the Feminist Anti-War Resistance group in Russia. “War means violence, poverty, forced migration, broken lives, insecurity and the disappearance of a future,” they declared. “It opposes the whole essence of the feminist movement.”

On Sunday, the Russian Anti-War Committee urged the world to recognise that “there is a clear difference between Russians – involuntary participants in Putin's adventures – and those who consciously help the Putin regime in fratricidal aggression”.

The Russian Movement for Conscientious Objectors has called on Russian armed forces personnel to refuse to fight. The Recruits’ School – a Russian group campaigning for the rights of conscripts – say they will back those who refuse.

According to OVD-Info, many of the arrested protesters have been denied the rights that they are granted by Russian law, with police illegally taking their DNA and fingerprints and detaining them beyond the legal time limit.

The PPU is backing peace activists in Russia and Ukraine, posting footage and information on social media to ensure that more people in the UK are aware of peace campaigns around the world. Some of the footage shows Russian police assaulting peaceful protesters as they arrest them.

Yesterday police in St Petersburg arrested elderly peace activist Yelena Osipova, who survived the Siege of Leningrad as a child. She displayed two anti-war placards and was taken away by police as younger people applauded her and chanted, “No to war!” (pictured above).

Meanwhile, the Ukrainian Pacifist Movement has continued to condemn the Russian invasion and the response of NATO and the Ukrainian government.

Russian and Ukrainian peace activists have joined with peace activists elsewhere in the world to call for resistance to militarism in all forms. The Peace Pledge Union has been promoting the hashtag #NoToPutinNoToNATO.

In condemning Putin’s brutal invasion of Ukraine, the PPU insisted that they would be consistent and continue to oppose the Saudi bombing of Yemen – carried out with military support from the UK – and all other wars around the world.

Emphasising their belief that peace can be built from the grassroots, the PPU today said that “ordinary” people in Ukraine and Russia were doing far more to tackle war and injustice than the politicians or generals of either East or West.