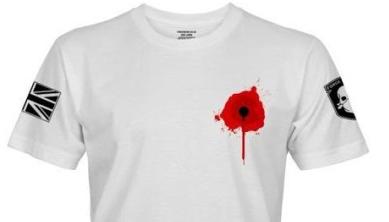 A clothing company has been accused of insulting the dead by selling T-shirts and hoodies that depict a red poppy as a gunshot wound in the chest.

The Peace Pledge Union (PPU), known for producing white poppies to remember all victims of war, urged the company Force Wear to recognise that the image cheapens remembrance and insults victims of real gunshot wounds.

The PPU also encouraged the Royal British Legion, producers of red poppies, to disassociate themselves from the gunshot wound T-shirts and hoodies, which are described as “Chest Wound Poppy” on Force Wear's website.

“Far from respecting the dead, these images trivialise the horrors of war and insult gunshot victims. This is an obscene example of everyday militarism.

"It is what happens when remembrance becomes a celebration of militarism rather than a chance to reflect on the suffering caused by war and to learn from the past.

"Remembering people killed in war, whether forces personnel or civilians, should lead us to work for peace, not to glorify militarism.”

White poppies, which have been worn since 1933, represent remembrance for all victims of war of all nationalities, as well as a commitment to peace and a rejection of attempts to glamourise war.

This year's white poppy campaign will be launched on Monday (25 October) although white poppies are already available to buy from the PPU website and from over 150 outlets around the UK.

You can buy your white poppy at https://shop.ppu.org.uk.