Tackling Covid is not central to our purpose, admits armed forces boss 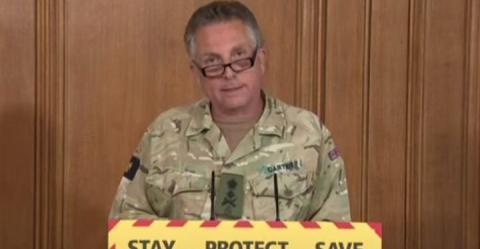 Tackling Covid is not central to our purpose, admits armed forces boss

The Chief of the Defence Staff has said that assisting with the struggle against Covid 19 is not part of the military's core purpose.

The statement comes after a year in which pro-military commentators have emphasised the assistance offered by military personnel in building hospitals and delivering vaccines.

The Peace Pledge Union, Britain’s leading pacifist campaign group, has expressed gratitude to everyone helping to tackle Covid, including military personnel, but has pointed out that this sort of work is not what the armed forces exist for. Now the head of the armed forces has effectively agreed with them.

Nick Carter, who as Chief of the Defence Staff is in charge of the UK armed forces, told the Daily Telegraph yesterday that he was proud of the role played by the armed forces personnel in tackling the pandemic. But he agreed with the newspaper’s Defence Editor, Con Coughlin, that such work should not detract from the military’s “central role”.

Carter told the paper, “The principle purpose of the armed forces is to be ready to fight the country’s enemies and to provide the deterrence that is inherent in all of that.”

The Peace Pledge Union (PPU) described this as a euphemism for waging war and threatening to wage war. They challenged Carter’s assumption that everyone in the country has the same enemies and that problems can be solved with violence.

Last year, the PPU launched the Healthcare Not Warfare campaign, calling for military resources and funding to be diverted to defence from Covid 19 and other threats to human security.

Carter told the Telegraph that there are currently 6,000 personnel drawn form the army, navy and air force providing support for the NHS in tackling the pandemic. This represents less than 3.1% of UK armed forces personnel, of whom there are 195,050 according to the Ministry of Defence’s latest statistics.

The PPU said that militarists must not be allowed to misuse the Covid pandemic to give a false impression of the role of the armed forces, which are rooted in violence, coercion, obedience and nationalism.

They added that the skills and commitment shown by forces personnel who are delivering vaccines could be better used as part of well-funded and well-staffed civilian emergency services.

In his interview with the Daily Telegraph, Nick Carter said, “The world is very unstable”. But he put the blame on regimes such as Russia, Iran and North Korea, as well as terrorist groups, while failing to acknowledge the role by British armed forces and arms companies in global instability. In the last 20 years, UK armed forces have supported US forces in invading or bombing countries including Afghanistan, Iraq, Libya and Syria.

“The Covid pandemic is a deadly reminder that we face many threats to our lives and livelihoods that are not military,” said PPU Campaigns Manager Symon Hill. “Pandemics, poverty and the climate emergency cannot be tackled with weapons. The global effort to produce Covid vaccines demonstrates what can be achieved when people around the world co-operate to counter threats to security.”

He added, “Sadly, Nick Carter – along with the Conservative and Labour front benches – seems unable to move on from an antiquated and destructive approach that confuses security with armed force.”

Peace Pledge Union members and allies will gather online on 4th March to explore ways of tackling militarism in the pandemic. Find out more here!