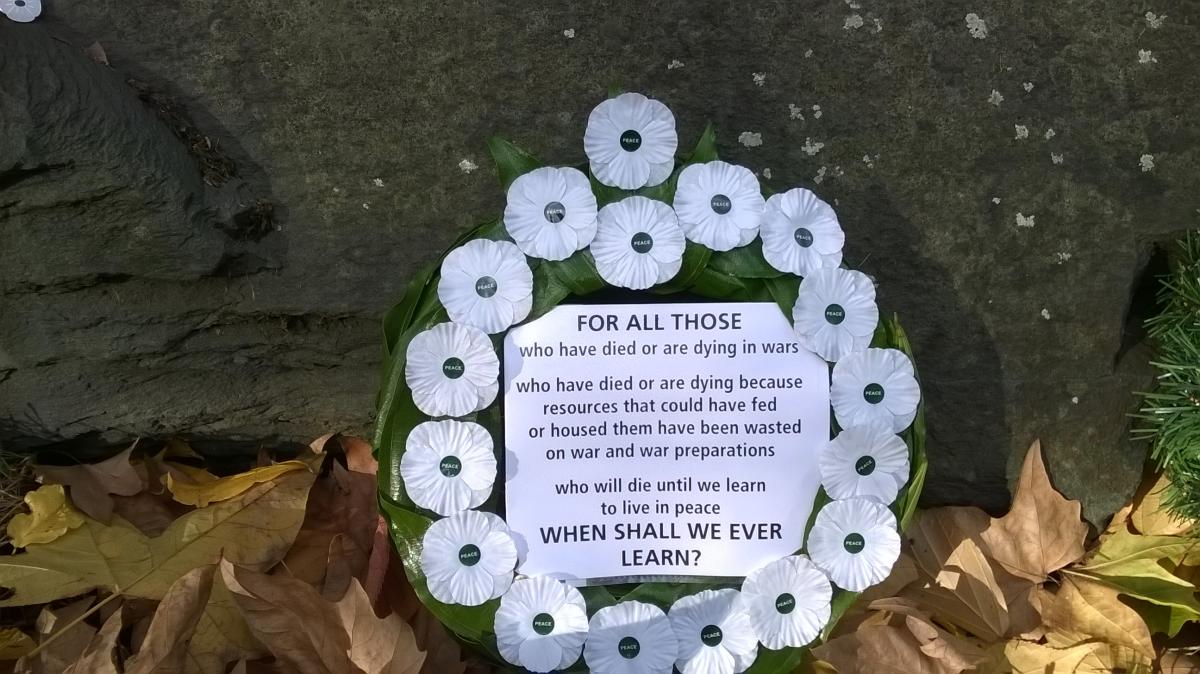 White poppy wearers have criticised Theresa May for planning to lay a wreath to remember the war dead while pursuing policies that are fuelling war.

They pointed out that civilians in Yemen could be killed with British-made weapons at the same time that UK politicians talk of mourning victims of war on Remembrance Sunday.

The Peace Pledge Union (PPU) is to hold an Alternative Remembrance Sunday Ceremony, only a short walk from the official ceremony at the Cenotaph. It will take place at 12.00 noon on Sunday (12 November) in Tavistock Square, London WC1.

The PPU insisted that the best response to remembering those who have died and suffered in war is to reject war and work for peace.

Speakers at the Alternative Remembrance Sunday Ceremony will include Sam Walton, a pacifist who was recently found Not Guilty of criminal damage after attempting to disarm warplanes bound for Saudi use in Yemen.

Those present will observe two minutes’ silence and lay a wreath of white poppies to remember all victims of war, both civilians and members of armed forces, of all nationalities.

The PPU report that this is another year of high sales for white poppies, with 97,500 sold as of 8 November. This is the fourth year running in which sales have been around the 100,000 mark. The last four years have seen higher sales of white poppies than any year since they were introduced, in 1933.

“Children in Yemen could be killed by Saudi forces with British-made weapons at literally the same time that Theresa May lays her wreath at the Cenotaph. Ministers talk of remembering the horrors of war while presiding over one of the largest military budgets in the world, ploughing billions into the renewal of nuclear weapons and recruiting vulnerable 16-year-olds into the UK armed forces.

“Remembering those who have died and suffered in war should lead us to learn from the past, to challenge militarism and to take action for peace.”

Other alternative Remembrance events will take place around the UK, many of them organised by local peace groups or faith communities.

White poppies represent remembrance for all victims of war, a rejection of militarism and a commitment to peace. They were founded by the Women's Co-operative Guild in 1933 and are now distributed by the Peace Pledge Union (PPU).

The PPU has sold around 100,000 white poppies each year in the last four years. This is the highest figure since white poppies were first worn in 1933. As of 8 November this year, sales stood at just over 97,500.

Many local groups selling white poppies donate the money to charities supporting victims of war. At a national level, much of the money raised by white poppies goes towards producing, distributing and publicising them. Any more raised above this goes towards the PPU's education and campaigning work, promoting nonviolent approaches to conflict and challenging militarism.