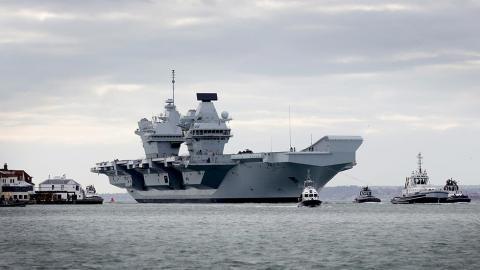 Headlines this morning have focused on plans to cut the number of full-time army personnel from about 80,000 to 70,000. But the multi-billion pound plans involve major new schemes such as a new submarine project. Defence Secretary Ben Wallace said yesterday that a new special forces unit, called the Special Operations Brigade, will be created at a cost of £120 million.

This comes on top of Boris Johnson's decision last week to raise the cap on nuclear warheads by 44%.

The Peace Pledge Union, Britain's leading pacifist group, condemned the government's plans, many elements of which were published yesterday. More details will be known when the Ministry of Defence publishes the Defence Command Paper later today, forming part of the government's Integrated Defence and Foreign Policy Review.

While welcoming plans for a cut to the number of army personnel, the PPU pointed out that overall the plans will involve a major increase in military spending and a ramping up of military tension. Boris Johnson has already promised to increase UK military spending by £24bn over four years - the largest percentage increase since the Korean War.

The PPU described the plans as an insult to underpaid NHS staff and to people facing unemployment, poverty and mental ill-health in the wake of the Covid pandemic. They also contrasted the large rise in military spending with the decision to cut the overseas aid budget by almost a third.

They accused ministers of making the whole world less safe by fuelling an arms race and giving regimes such as Putin's Russia an excuse to increase their own military spending in response.

The PPU promised widespread resistance in response to the government's increasingly militaristic policies. They will be campaigning alongside many other groups concerned with peace and human rights.

The cut in army personnel seems in part to be a response to the armed forces' frequent failure to meet recruitment targets. The PPU said that many young people are rightly relucant to join an institution rooted in violence and obedience to authority.

“The Covid pandemic has been a deadly reminder that bombs and bullets can't make us safe – but Boris Johnson and his pals don't seem to have noticed," said a statement from the PPU. "Days after telling nurses that there is no money for a decent pay rise, ministers can produce billions to spend on fuelling an arms race and making the world less safe."

The Peace Pledge Union is a group of people committed to resisting war and tackling the causes of war. Join us!