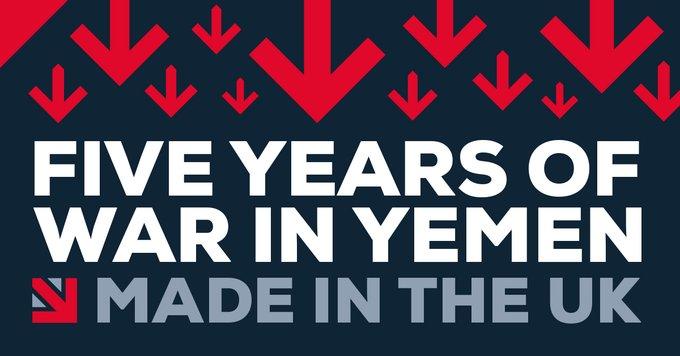 The Campaign Against Arms Trade (CAAT) has launched a legal challenge against the renewal of British arms sales to the Saudi regime.

The UK has licensed at least £5.4bn worth of arms sales to Saudi Arabia since the Saudi bombing of Yemen began in Mach 2015.

News of the legal challenge was welcomed by the Peace Pledge Union (PPU), which is affiliated to CAAT. The PPU is this year focusing on Yemen during the white poppy campaign in the run-up to Remembrance Day, emphasising that current wars such as the conflict in Yemen must be remembered.

In June 2019, following a case brought by CAAT, the Court of Appeal ruled that the government acted unlawfully when it licensed the sale of UK-made arms to Saudi-led forces for use in Yemen without making an assessment as to whether or not past incidents amounted to breaches of International Humanitarian Law. As a result, the government was ordered not to approve any new licences and to retake the decisions on extant licences in a lawful manner.

But in July 2020 the government announced that it was resuming arms sales.

This followed a review by the Department of International Trade which concluded that any violations of International Humanitarian Law (IHL) committed by the Saudi coalition were “isolated incidents”, despite the fact that hundreds of attacks on residential areas, schools, hospitals, civilian gatherings and agricultural land and facilities have been documented.

Since announcing its conclusion and the decision to resume licensing, the government have provided very little information on how they reached the conclusions they did, including how they decided there was no "pattern" of violations.

UK arms export criteria says that if there is a "clear risk" that a weapon "might" be used in a serious violation of International Humanitarian Law (IHL) then an arms sale should not go ahead.

Last month a United Nations expert panel concluded that Saudi-led forces had been responsible for a pattern of IHL breaches and concluded that countries arming parties to the war could be "aiding and assisting" war crimes.

The UK’s biggest arms company, BAE Systems, has made £15 billion in revenue from services and sales to Saudi Arabia since 2015.

“These arms sales have only fuelled the destruction and prolonged the conflict,” said CAAT's Andrew Smith. “The government may think that the widespread destruction of schools, hospitals and homes can be dismissed as 'isolated incidents' but we do not. These arms sales are immoral, and we are confident that the Court will confirm that the decision to renew them was illegal.“

Solicitor Rosa Curling of Leigh Day, representing CAAT said, “Our client has provided evidence to the court which shows every independent international body which has investigated specific violations of International Humanitarian Law by the Kingdom of Saudi Arabia in Yemen has concluded that the Kingdom of Saudi Arabia has perpetrated repeated violations of fundamental rules of International Humanitarian Law.”

The PPU expressed support and solidarity to CAAT's actions and repeated their calls for an end to the UK's government's military support for Saudi Arabia. In addition to arms sales, UK armed forces are involved in training Saudi forces, both in the UK and in Saudi Arabia.

The PPU, who produce white poppies, insist that Remembrance Day should involve remembrance of all victims of war, both civilian and military, of all nationalities. They said that the UK government cannot meaningfully talk of remembering the war dead while continuing with arms sales and preparations for war, including arming and training the Saudi forces attacking civilians in Yemen.