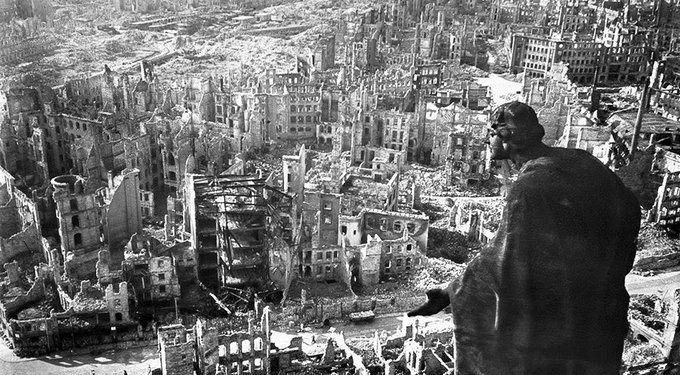 The Peace Pledge Union has challenged ministers' failure to comment on the 75th anniversary of the RAF's mass killing of civilians.

Around 25,000 civilians were killed in Dresden by the Royal Air Force and US forces between 13 and 15 February 1945. The UK government has never accepted that there was anything wrong about the mass killing.

The UK government is promoting various events to mark the 75th anniversary of the end of World War Two this year, particularly VE Day in May. The Peace Pledge Union (PPU) said that by ignoring Dresden ministers are giving the impression that they are interested only in very narrow and partial remembrance of the horrors of the Second World War.

Neither Prime Minister Boris Johnson nor Labour leader Jeremy Corbyn appear to have commented on the anniversary today, a day on which the news agenda in Britain has been dominated by Johnson's cabinet reshuffle.

The PPU backs remembrance for victims of all sides in World War Two, whatever their nationality.

In the 1940s, the PPU campaigned (algonside others) against the bombing of German civilians, insisting that ends do not justify means and that Fascism cannot be defeated with Fascist methods.

The PPU said it was absurd to suggest that criticism of the Dresden bombing implies support for the Nazis, as if children in Dresden were somehow responsible for Nazi atrocities.

The government has called for a "moment of celebration" to mark the 75th anniversary of VE Day on Friday 8 May. They have scrapped the May Day bank holiday to make way for a VE Day holiday on 8 May.

The PPU will also be marking the 75th anniversary of VE Day. They said that it should be a time for mourning and learning from the past, not for celebrating or promoting a simplistic view of World War Two.