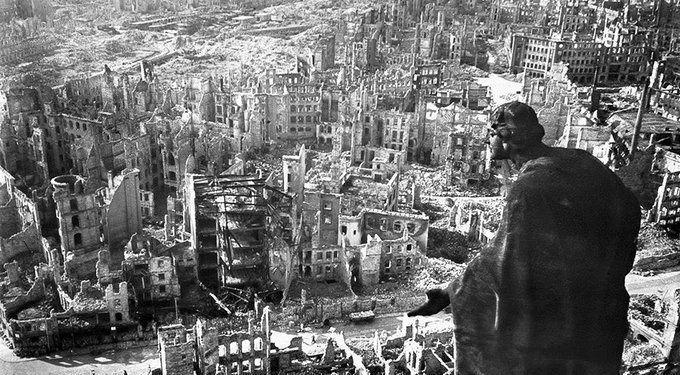 The PPU has said that the 75th anniversary of VE Day is an occasion for remembering victims of war and learning from the past.

Peace Pledge Union members will join many others in observing two minutes of silence at 11.00am on Friday 8th May. The PPU emphasised that they will be remembering victims of war of all nationalities, including civilians, members of armed forces and conscientious objectors.

The UK government recently announced plans for “celebrating” VE Day 75 during the lockdown. The PPU said that the government risks trivialising the suffering of millions of people by turning the anniversary into a party.

Boris Johnson will broadcast to the country and extracts from Winston Churchill's speeches will be played on the radio. The government are encouraging people to place an image of a World War Two soldier in their window, and are providing advice on staging a “1940s style” tea party at home.

"There are still millions of people around the world who remember the horrors of World War Two," said Geoff Tibbs, the PPU's Remembrance Project Manager. "Millions more have heard about them from parents and grandparents. We must not trivialise their suffering by using the 75th anniversary of VE Day to glorify or simplify that history, which was one of unimaginable devastation."

The government's recent announcement involved a heavy focus on UK armed forces personnel, with little attention to the British civilians who were killed, let alone people of other nationalities.

"The global Covid 19 pandemic reminds us that people around the world have the same needs," said Geoff Tibbs. "We can only solve our problems by working together across borders."

The PPU is producing information sheets for children and young people about the varied attitudes that were taken towards VE Day in 1945.

A week after VE Day 75, the Peace Pledge Union will be joining with people around the world in observing International Conscientious Objectors' Day. In Britain, an online ceremony in support of conscientious objectors will take place at noon on Friday 15th May.

VE (“Victory in Europe”) Day was observed on 8th May 1945 after the German authorities surrendered to the Allies. It marked the supposed end of the war in Europe.

In fact, fighting carried on in several parts of Europe after this date, while deaths from war-related starvation and poverty also continued. The war carried on in Asia until August, with war-related suffering continuing long afterwards.

On VE Day in 1945, the Peace Pledge Union issued a statement welcoming the apparent end of the war in Europe and sharing with others in rejoicing at the end of military dictatorship in Germany and Italy. They added that they continued to regard violence as evil and that they would work with all people of goodwill to achieve the “true victory” of “justice and lasting peace".