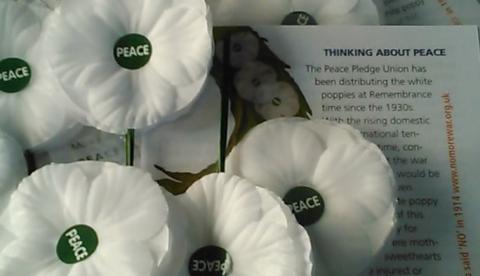 Veterans who wear white poppies have urged the Minister for Veterans to apologise for encouraging people to "ignore" white poppy wearers.

The veterans have written to Johnny Mercer to say that as Minister for Veterans he should not be encouraging people to ignore them.

The group of 12 veterans got together to write their letter after being angered by Mercer’s comments, which appeared in the Daily Star on Tuesday (5 November). They include veterans of the Army, Navy and RAF.

Reiterating comments made last year, Mercer described white poppy wearers as “attention-seeking” and accused them of trying to “hijack” the poppy.

In response, the veterans point out that white poppies have been worn since 1933 and that some of those who wear them are themselves former armed forces personnel. White poppies are distributed by the Peace Pledge Union (PPU).

White poppies represent remembrance for all victims of war, a commitment to peace and a rejection of attempts to celebrate or sanitise war.

Within their letter, the veterans write:

“As veterans, we believe we have the right to choose what colour poppy to wear. We suggest that instead of worrying about what poppy someone might wear, as Minister for Veterans, you would be better spending your energy addressing the issues afflicting veterans of all services. Veterans are disproportionately represented in the homeless population, in prisons, and with mental health issues.

“While the state pays for the waging of war, veterans are expected to rely on charity when they return to civilian life. In recent years, the government has been cutting the welfare state on which veterans should be able to rely, while maintaining the seventh highest military expenditure in the world.”

Veterans will be present at a number of white poppy-based remembrance events taking place around the UK on Sunday and Monday. These include the Alternative Remembrance Ceremony, organised by the PPU, in London's Tavistock Square at noon; as well as the march to the Cenotaph by Veterans for Peace at 1.00pm.