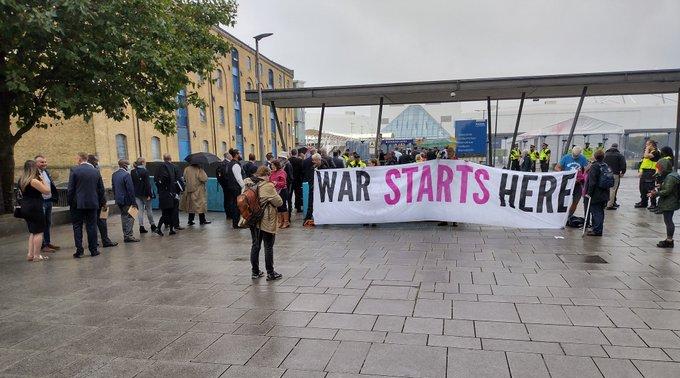 The Welsh government has sent officials to this week's London arms fair and funded an exhibition stand by an arms industry lobby group.

As Welsh First Minister, Mark Drakeford had promised in 2019 to review the Welsh government's involvement after their presence drew criticism when the event was last held.

The London arms fair, known euphemistically as Defence and Security Equipment International (DSEI) is taking place this week at the Excel Centre in east London. It has been faced with daily protests and been disrupted by nonviolent direct action. Last week saw direct action to disrupt the setting-up of the event.

Welsh ministers have now confirmed that a number of Welsh government officials are attending the DSEI arms fair. They have also funded an exhibition by the Aerospace Forum Wales, a trade association for aerospace and arms companies with a presence in Wales.

DSEI allows arms companies to meet representatives of governments and armed forces from around the world, including particularly authoritarian and aggressive regimes such as Saudi Arabia, Colombia and Bahrain.

Arms dealers and government representatives have been facing protests all week from groups that are part of the Stop the Arms Fair coalition, including the Campaign Against Arms Trade, Quaker Roots, the Peace Pledge Union, Palestine Action and Put Down the Sword.

Peace and human rights campaigners in Wales have today condemned the Welsh government's involvement in DSEI.

Ed Bridges, a member of the Peace Pledge Union's elected Council, who lives in Cardiff, said:

“The Welsh government's international strategy laudably stated that Wales is 'committed to human rights and promoting peace', but how can we square that with queuing up to deal in weapons at an arms fair? It sends completely the wrong message for Wales to send representatives to this event where they will be brushing shoulders with human rights abusers seeking to trade in death and misery."

The PPU urged Mark Drakeford and his ministers to pull out of DSEI and to follow in Wales' traditions of peace activism and nonviolent resistance to injustice.

Many people have already travelled from Wales to take part in the protests and nonviolent direct action against DSEI. On Tuesday (14 September), Welsh peace campaigners laid a wreath of white poppies at the entrance to the arms fair in memory of all victims of war and the arms trade, alongside a similar wreath laid by the Peace Pledge Union.

Plaid's Cymru's spokesperson on international affairs criticised ministers for “putting public money towards the continued support of this contemptible event”. Welsh ministers have also been criticised by members of their own party, Welsh Labour, for supporting the arms fair.

Want to join further resistance to militarism and the arms trade, and promote peace? Here's our list of upcoming events.