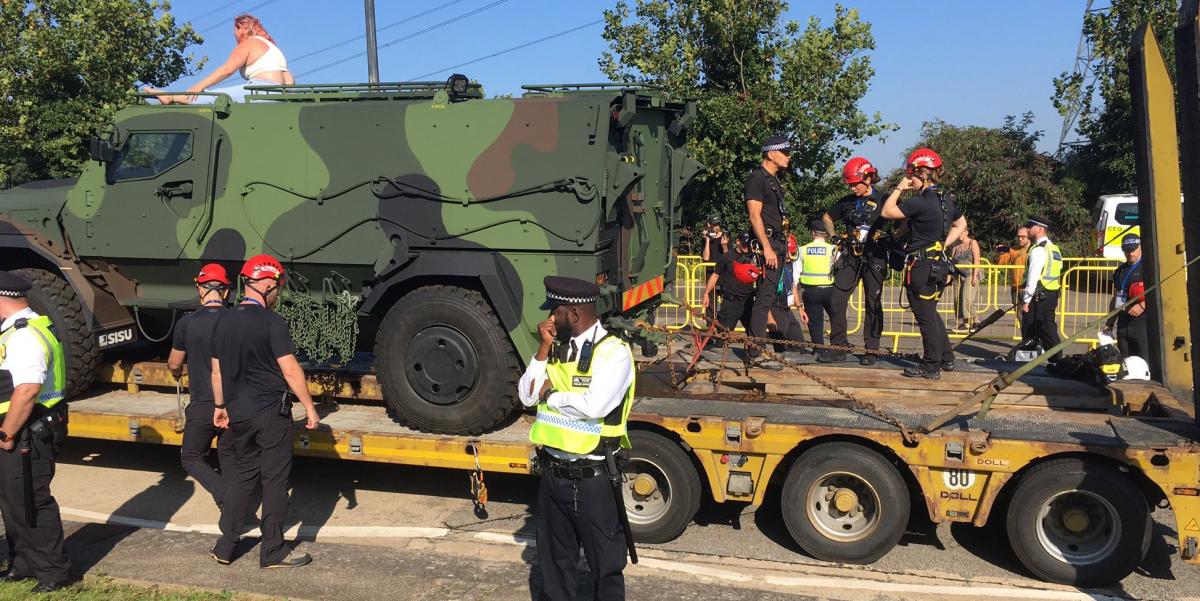 People are taking nonviolent direct action in London to impede attempts to set up one of the world's biggset arms fairs.

The DSEI arms fair is due to open at the Excel Centre in east London on Tuesday (14 September) and last until Friday 17 September.

While major protests are expected when the fair takes place next week, vehicles entering the site have already been delayed by nonviolent resistance. People have blocked roads and climbed on top of military vehicles.

Each of the main gates to the Excel Centre have been blocked for several hours at a time since direct action began on Monday (6 September).

This afternoon (Thursday 9 September), the east gate to the Excel Centre has again been blocked by protesters nonviolently occupying vehicles driving towards the venue.

The Stop the Arms Fair coalition today accused the police of being “incredibly abusive” towards nonviolent activists and “using excessive force” against a disabled protester.

The London arms fair, known euphemistically as Defence & Security Equipment International (DSEI) takes place every second September. Backed by the UK government, it allows arms companies to meet and make deals with representatives of governments and armed forces around the world, including repressive regimes and countries in conflict with each other.

The protests and direct actions are mostly organised by members of the Stop the Arms Fair coalition, which brings together groups including the Campaign Against Arms Trade (CAAT), Palestine Action, Demilitarise Education, the Peace Pledge Union (PPU) and a range of student organisations and religious groups.

The Peace Pledge Union describe the arms fair as an example of everyday militarism, with military events and the arms industry being wrongly treated as a part of civilian life.

On the roads and grass verges outside the Excel Centre, campaigners have been running talks, workshops and discussions all week, exploring how the arms trade relates to issues including climate, migration, racism and education.

At 6.00 this evening, East End Sisters Uncut will hold an online event called Sisters Learn, to consider feminist resistance to the arms trade and state violence.

More protests are planned over the following days, ahead of the opening day of the arms fair on Tuesday.

As the DSEI arms fair begins on Tuesday, arms dealers and organisers will face a wave of nonviolent actions throughout the day, followed by other protests during the week.

As arms dealers arrive at the west gate to the Excel Centre on the first day of DSEI, they will have to pass a remembrance ceremony for all victims of war and the arms trade, organised by the Peace Pledge Union for 8.00am on Tuesday.

The PPU and other groups are also supporting local people in Farnborough and Malvern who are planning resistance to local arms fairs due to take place there in October and November.

Want to resist the arms fair? Find out more here about what you can do!