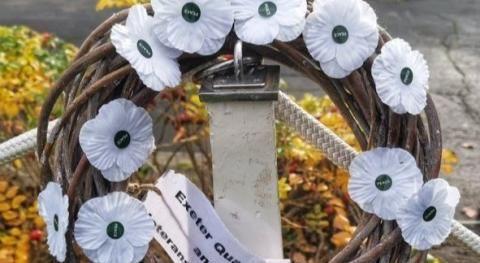 Hundreds of white poppy wearers have attended ceremonies to remember all victims of war and to commit themselves to peace.

Around 100 people from many walks of life, including armed forces veterans, attended the national Alternative Remembrance Ceremony in London's Tavistock Square, organised by the Peace Pledge Union (PPU). Many others sent messages of support as they were unable to attend.

Meanwhile, the PPU accused Boris Johnson of hypocrisy for talking of remembering the war dead while pursuing policies that fuel war. Johnson has been boasting of his support for nuclear weapons and high military spending during the general election campaign.

White poppy-based remembrance events have also taken place today in cities including Glasgow, Bristol, Swansea and Manchester, as well as smaller towns such as Leamington Spa, Bury St Edmunds and Hebden Bridge. In Aberystwyth, white poppy wearers worked with the local British Legion for a combined ceremony of red and white poppies.

The ceremony in London saw several people moved to tears by a statement from civilians in Yemen about the horrors of the war there. UK armed forces are training the Saudi troops carrying out the bombing, and the UK government has authorised multi-billion pound arms sales to Saudi forces since the war began.

After two minutes' silence, the first white poppy wreath was laid by the PPU's Katie McLean, before other wreaths were laid, including a wreath laid by children to remember children killed in war, and by representatives of groups including Conscience, the Fellowship of Reconciliation, Quakers in Britain, London Students for Yemen and the Anglican Pacifist Fellowship.

Also in London, members of Veterans for Peace marched to the Cenotaph to lay wreaths in memory of all victims of war. In Bristol, white poppy wearers held a walk of remembrance, visiting arms companies and military institutions complicit in war today.

Introducing the ceremony in London, the PPU's Amy Clark-Bryan quoted Eleanor Barton, one of the people who founded white poppies in 1933. Eleanor Barton said:

"If you can walk in the street wearing a white poppy, when everyone else has a red one, then I say you are a brave woman."

Shadia Robertson, a student a King's College London and a member of London Students for Yemen, was attending the ceremony for the first time. She said afterwards:

"It was a great opportunity to be around people who understand the impact of war. Once we remember Yemen, we can relate that to all the other places that war is happening, and all those impacts go beyond the documented civilian casualties. You can see it in the destruction of infrastructure, the poverty and all the deaths related to that. War can't be the only way. It isn't the only way."