Williamson urged to rule out 'troops on the streets' after Brexit 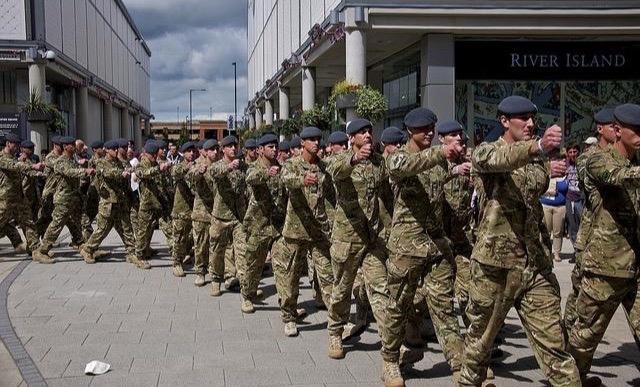 Williamson urged to rule out 'troops on the streets' after Brexit

UK "Defence" Secretary Gavin Williamson is facing pressure from MPs and campaigners to rule out using troops for social control in the event of a no-deal Brexit.

Today, Jonathan Edwards MP has tabled a motion (Early Day Motion 2075) on the issue in the Commons, following discussions with the Peace Pledge Union (PPU).

The motion calls on Williamson to respond to media reports that his department is making plans for martial law or other emergency powers if a no-deal Brexit leads to social unrest. The Civic Contingencies Act allows the government to suspend key civil liberties by declaring a State of Emergency.

Gavin Williamson has already said that 3,500 troops are on stand-by to deal with “contingencies” in the event of a no-deal Brexit. He has not responded to calls by the Peace Pledge Union to rule out using them for police functions or social control.

The Peace Pledge Union (PPU) predicts that MPs from several parties will back the motion tabled by Jonathan Edwards, Plaid Cymru MP for Carmarthen East and Dinefwr. The PPU works with MPs from various parties and PPU members include both remain and leave voters.

Gavin Williamson has already said that 3,500 troops are on stand-by to deal with “contingencies” in the event of a no-deal Brexit. Williamson's deputy Mark Lancaster recently put in place an order to enable the calling-up of reserves to deal with Brexit-related situations.

Following this, the Sunday Times quoted anonymous sources in the civil service saying that preparations are being made for a possible introduction of martial law.

The Peace Pledge Union (PPU) urged MPs to demand answers from the government. The PPU works with MPs from various parties and PPU members include both remain and leave voters.

“Both leavers and remainers emphasise their belief in democracy. A democratic society is not a militarised society. Sending troops onto the streets is no alternative to listening to people's grievances.

“In recent years, we have seen a sharp increase in military influence in everyday life, with school cadet forces more than doubling and the introduction of initiatives such as Armed Forces Day, while the army continues to target the poorest and most vulnerable young people for recruitment. The chaos over Brexit must not be misused to present the armed forces as the only institutions that can save us in a crisis.”

Peace Pledge Union members and supporters are encouraging their MPs to sign the Early Day Motion. They are also raising the issue on social media, with the hashtag #NoTroopsOnTheStreets.

(Photo credit: The above photograph was taken by Martin Pettitt and is used with thanks under a Creative Commons Licence).