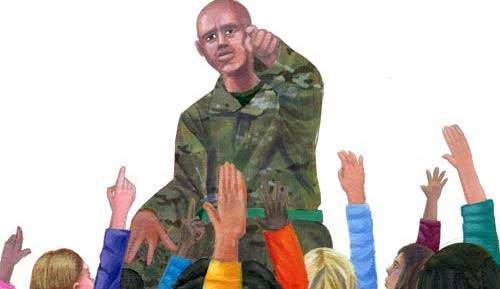 UK Defence Secretary Gavin Williamson has been accused of promoting politically biased schooling after announcing new plans to encourage a “military ethos” in British schools. Tory MP Robert Goodwill, who has been commissioned to write a report on the plans, has suggested that some schools could become “military academies”.

But the Peace Pledge Union (PPU) said that schools would violate their legal duty to be politically balanced if they promoted pro-military attitudes.

The PPU, a longstanding British pacifist network, said it is as wrong for schools to promote a particular position on armed force as it would be for them to advocate a chosen view on party politics, abortion, Brexit or other controversial political issues.

Although the UK government has already spent over £45 million on schemes based on a “military ethos” in schools, Williamson wants to take the idea further, targeting schools in “disadvantaged” areas.

The PPU expressed alarm at the idea of schools teaching "military values” uncritically. They added that young people would effectively be taught that it is acceptable to solve problems with violence and that authority should be obeyed without question.

The PPU frequently hears from teachers, school students and parents who are concerned about the growth of military projects, armed forces and cadet units in British schools. Dozens of teachers shared their concerns on the issue when PPU members attended the National Education Union (formerly National Union of Teachers) conference last weekend.

“Gavin Williamson's suggestion is sadly not an April Fool's joke but the serious intention of a government apparently determined to militarise Britain's children.

“Rather than tackling poverty and deprivation, the government is patronising working class young people by suggesting that only military discipline can help them. The last thing we should be teaching young people is the idea that violence is the solution to conflict and that people should do what they're told without reference to their own conscience.

“Schools don't need a military ethos. They need a balanced ethos, so that young people hear a range of perspectives and are able to form their own views as they grow up.”