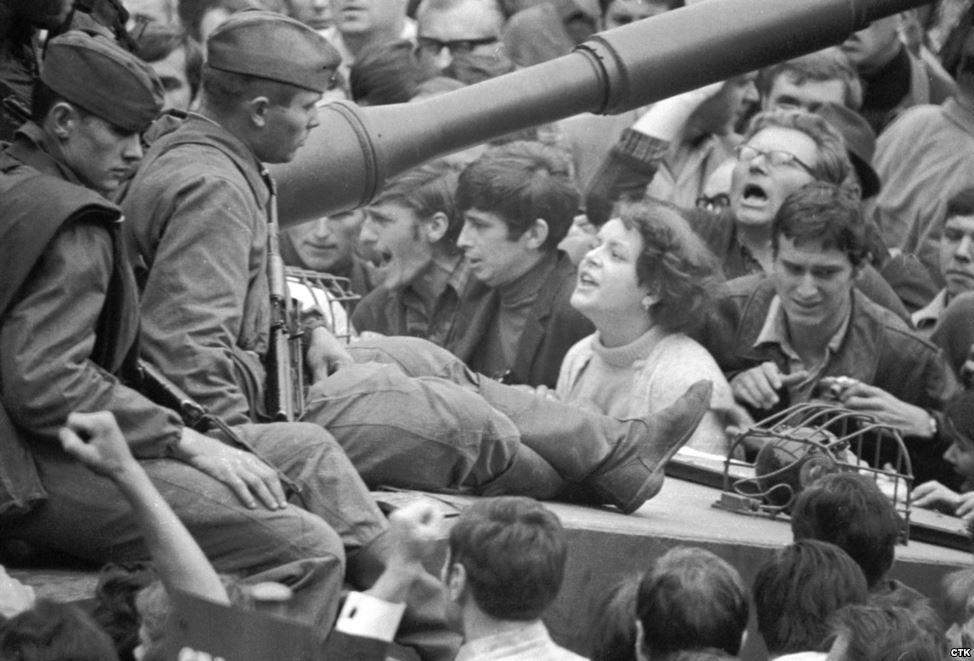 Fifty years after Soviet troops and their allies invaded Czechoslavakia, pacifists are saying that the world can learn from the nonviolent resistance that followed.

Warsaw Pact troops entered Czechoslavakia on the night of 20-21 August 1968, to suppress the country's policies of "socialism with a human face" and bring it back under Soviet dominance. The USSR's military commanders expected to subdue the country in four days. That's because they knew they had the forces to crush violent opposition - but they weren't prepared for the level of nonviolent resistance that they encountered.

People in Czechoslavakia engaged in mass non-co-operation, refusing to operate transport for the invaders or to refuel their planes. They broadcast radio messages urging resistance without violence. There were strikes and mass demonstrations while people blockading the roads used by the invading troops, with cars and buses and with their own bodies. The invading soldiers were leafleted and their commanders feared mutiny.

Most famously, road signs were painted over or redirected, sending many troops in the wrong direction or in circles.

And in Moscow on 25 August, a small group of brave Russian peace activists demonstrated in Red Square against the invasion. Several of them suffered years of imprisonment as a result.

The skills of nonviolence learnt by people in Czechoslavakia in 1968 may also have helped to lay some of the groundwork for resistance and social change in the late 1980s and early 1990s. They can also serve as an inspiration to us today.

War Resisters' International - of which the Peace Pledge Union is the British section - backed nonviolent resistance in Czechoslavakia in 1968 and linked it to opposition to war and aggression around the world. They used the slogans, "End NATO! End the US war in Vietnam! End the occupation of Czechoslavakia!"

Now, as then, militarism is international. So is our resistance.