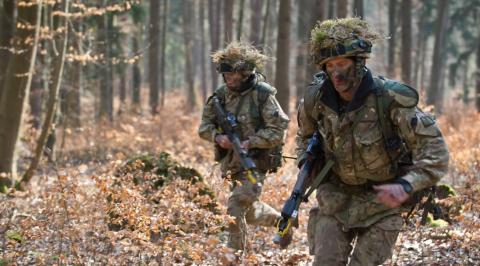 The Peace Pledge Union say that they are sad but not surprised by the news that British troops have been deployed to protect oil-fields in Saudi Arabia.

Although the operation by the Royal Artillery began in February, it was kept secret from Parliament and the public until it was revealed on Friday (27 November).

The deployment began at a time when the UK government were prevented from signing off on arms exports to the Saudi regime, following a court ruling in favour of a case brought by the Campaign Against Arms Trade (CAAT). The government resumed issuing arms export licences for Saudi Arabia in July.

News of the oil-fields deployment is further evidence that British troops were continuing to assist the brutal Saudi regime even when arms companies were prevented from exporting arms to the country. Saudi pilots, who are currently involved in bombing civilians in Yemen, have been trained by the UK military both in Saudi Arabia and in the UK.

There has been particular controversy over the training of Saudi pilots at RAF Valley in North Wales, which has drawn protests from local people. The RAF recently abandoned plans for a new military training site at nearby Llanbedr Airfield, following a campaign by local members of Cymdeithas y Cymod and the Peace Pledge Union (PPU).

"This is a reminder that British military support for the vicious Saudi regime is not only about the horror of arms exports but also about the basic function of the UK armed forces," said Symon Hill, PPU Campaigns Manager. "Despite all the talk about British troops defending freedom and democracy, they are in fact defending the wealth of one of the world's most oppressive regimes. Military recruitment of young people in the UK is based on a string of lies about the purpose of the armed forces."

News of the secret deployment comes only days after an investigation by Declassified UK revealed that the UK armed forces have a permanent presence at 145 bases in 42 countries or territories around the world - far more than admitted by the Ministry of Defence.