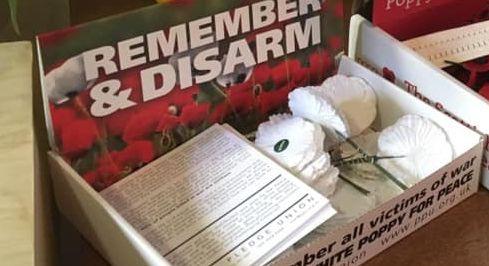 Conservative MP Johnny Mercer has misrepresented white poppies for a second time. Mercer, the MP for Plymouth Moor View, again implied that white poppies were a recent invention. In fact, they were founded 85 years ago.

Speaking to the Daily Telegraph, Mercer said that the Peace Pledge Union could have picked any other symbol rather than a poppy, which "has been used to raised money for injured soldiers and their families for a long time".

White poppies were introduced in 1933 by the Co-operative Women's Guild. Many of their members had lost loved ones in World War One and they were well aware of the horrors of war. They chose the poppy because they wanted a symbol of remembrance, but were worried that red poppies were becoming removed from the original Remembrance message of "never again".

Mercer's apparent ignorance suggests he has not read the stream of tweets that were sent to him after he attacked white poppies on Twitter on 22 October. On that occasion, he accused white poppy wearers of trying to "hijack" the poppy symbol.

He also said that people who didn't want to wear a red poppy should wear no poppy at all. In his latest comments, however, he appears to have backtracked, telling the Telegraph, "If people want to wear a white poppy then that is up to them."

Regarding Mercer's comments about red poppies raising money for injured veterans, the Peace Pledge Union pointed out that Mercer has repeatedly voted for cuts to the welfare state, on which many veterans and others rely.

White poppies can be bought online and from a number of shops, cafes and other outlets.

The Peace Pledge Union, along with other members of the First World War Peace Forum, will hold an Alternative Remembrance Sunday Ceremony in Tavistock Square, London, at 1pm on 11 November. Similar ceremonies will be held elsewhere in Britain.