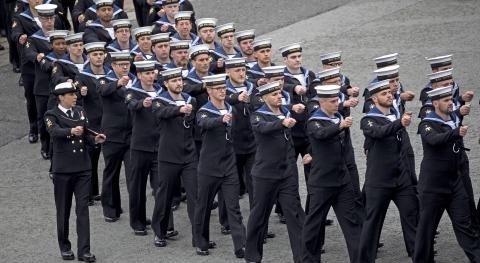 Labour leader Keir Starmer has been accused of promoting a misleading image of the UK military while marking Armed Forces Day.

The Peace Pledge Union (PPU) said that Starmer did not appear to have learnt from the Black Lives Matter movement as he heaped gushing praise on the armed forces, ignoring their role in colonial aggression over centuries.

The PPU added that both Keir Starmer and Boris Johnson, with their unquestioning praise for the military, are showing no respect for personnel who have been exposing abuse and racism within the forces in recent months, or the many people suffering from the actions of armed forces around the world.

The PPU, whose members include supporters of several parties and none, urged Starmer to support veterans who are suffering from cuts to the welfare state and to mental health services, rather than buying into uncritical praise of the armed forces with comments indistinguishable from those of Conservative ministers.

“The armed forces are abusive institutions. They target the poorest and most vulnerable young people for recruitment, brutalise them through military training, deploy them in wars that fuel poverty and destruction in other parts of the world, and often dump them back into poverty when they leave.

"Keir Starmer says he wants to 'listen' to the armed forces. I hope he will also listen to forces personnel whose reports of abuse and racism have been ignored, to veterans blowing the whistle on the reality of the occupation of Iraq and Afghanistan, to Black Lives Matter campaigners pointing out the truth of colonial history, to Yemeni civilians being attacked by Saudi bombers who are trained by the RAF”.

“The pandemic and the murder of George Floyd have starkly revealed the embedded, inbuilt racism, oppression and violence of our national and global systems.

“This year, more then ever, I urge every individual, every community, every organisation, to ask uncomfortable questions about the history, assumptions and injustice we are reproducing by celebrating Armed Forces Day. Whose history and experiences are we focusing on? Whose history and experiences - of being murdered, occupied, discounted, and made less than human - are we silencing in these celebrations?”

The PPU believe that Starmer is right to praise forces personnel who have helped to tackle the Covid pandemic, but pointed out that 87% of forces personnel were neither deployed on Covid-related work or held on stand-by to do so.

They urged politicians of all parties not to allow military leaders to give an untrue impression of the military's role in the pandemic. While a minority of troops have thankfully helped with building hospitals and delivering supplies, other troops have continued to take part in NATO exercises, to drop bombs in Iraq and to train Saudi forces.