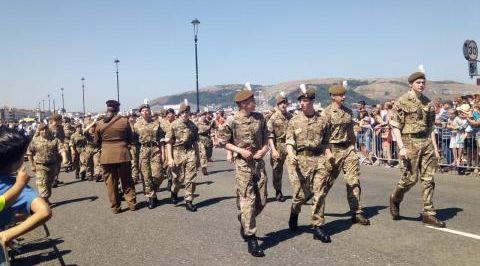 Ministers have announced an additional £1.1 million for school cadet forces in England after a decade that has seen heavy cuts to other youth services.

But the Peace Pledge Union (PPU) denounced the policy as the latest example of everyday militarism in the UK.

The UK government has already ploughed more than £50 million into creating new school cadet forces since 2016. Meanwhile, youth services in the UK were cut by over £400 million between 2010 and 2019, according to calculations by Unison.

The Peace Pledge Union urged the government to instead fund civilian youth services that can promote teamwork, resilience and leadership skills without military values of violence, nationalism and subservience to authority.

Robert Campbell, a PPU member who served for 13 years as a secondary school headteacher, said, "The presence of cadet forces in our schools is an increasing anachronism; the era of British imperialism and military domination is over and we need to be forging a new identity as a compassionate and peaceful nation. Increasing numbers of young people question this imperial and military legacy and therefore would never wish to join a cadet force."

He continued, "Regimented conformity is not the skillset we ought to be nurturing in young people in the 21st century, when imaginative and innovative solutions are needed to navigate the challenges and issues we all face: economically, socially, environmentally, politically.”

The PPU hears often from teachers, parents and school students who are alarmed by attempts to set up cadet forces in schools.

“It is incredibly disappointing to see this distorted allocation of funding, when there are ongoing and overwhelming calls from parents/carers, unions, local groups and young people themselves to invest in wellbeing and mental health services," said Saffron Gallup, the PPU's Education Service Manager. "Funding to youth services has been cut by £400m between 2010-19. Cadet forces have no place in schools and are certainly not the only agency capable of enabling 'the development of personal responsibility, leadership and self-discipline'.”

The announcement is the latest in a string of militaristic policies in recent weeks, including a 44% increase in the upper limit on UK nuclear warheads and the biggest percentage increase in UK military spending since the Korean War.

"Students can learn resilience, leadership and working as part of a team from sports teams, dance classes, theatre groups or critical thinking classes and activities," said Katie McLean of the PPU Youth Network.

She added, "It is the government who benefit from youth more receptive to military recruitment. Students would benefit from more support for the youth centres and activities they love, which have been consistently defunded over the past ten years.”

Join other PPU members and supporters online at 6.30pm on Monday 12th April to explore Challenging Militarism in Your Community.