Pacifists gather to plan resistance to militarism around Britain 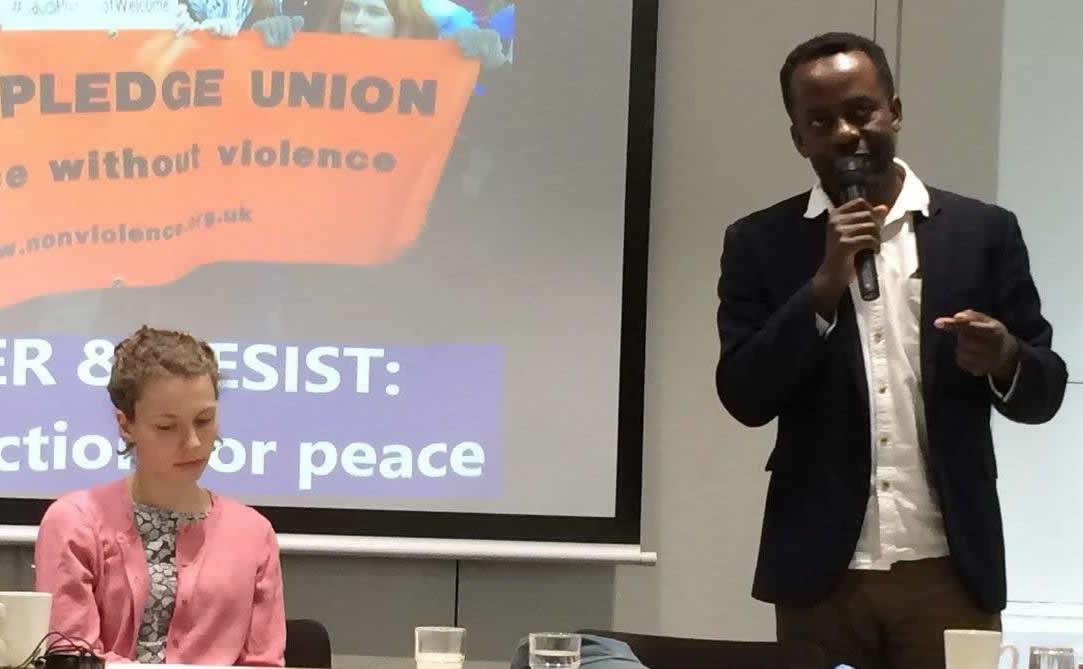 Pacifists gather to plan resistance to militarism around Britain

Pacifists and anti-militarists from around Britain gathered in London on Saturday (12 May 2018) to share ideas, learn from each other and make plans for resisting militarism locally, nationally and internationally.

The event - entitled 'Remember & Resist: Grassroots action for peace' - formed the annual conference of the Peace Pledge Union (PPU) and followed the PPU's annual general meeting earlier in the day.

People from around England, Scotland and Wales explored topics such as the growth of military visits to schools, the increase in cadet forces, campaigns against arms exports and nuclear weapons and the ongoing allegations of abuse of teenage recruits by army instructors.

Many of those present are planning protests, vigils and other actions in opposition to Armed Forces Day events in their towns or cities on 30 June.

Pariticipants noted that despite growing public opposition to war - in the wake of the disastrous wars in Iraq and Afghanistan - the government and parts of the media have ramped up an atmosphere of uncritical praise for the armed forces, with initiatives such as Armed Forces Day effectively promoting support for war by the back door.

Leicester-based poet Ambrose Musiyiwa (pictured above, with Amy Clark-Bryan in the chair) set the tone for the event with an opening speech on the impact of militarism on local communities. He was cheered as he reported on a successful campaign to persuade the Mayor of Leicester to back a ban on the armed forces inviting children to handle weapons at events in the city.

Ambrose drew links between militarist attitudes that promote war and hostility towards people seeking refuge as they flee war.

He also spoke of the bias involved in military visits to schools, saying, "You won't hear an army recruiter anywhere talk in a school about the people they are bombing".

A presentation on the Peace Pledge Union's work saw an emphasis on supporting people engaged in grassroots activism in various communities, as well as offering solidarity to pacifists and anti-militarists around the world (the PPU forms the British section of War Resisters' International).

Later, Beccy Talmy of the PPU Teachers' Network ran a workshop on challenging militarism in the classroom, while Rachel Melly of Yorkshire CND led a session for students and others keen to challenge militarism in universities with nonviolent resistance.

Another discussion explored how issues of gender and sexuality relate to militarism, as the army tries to pinkwash its image by claiming to be inclusive of women and LGBT people.

A panel discussion asked 'How can I challenge militarism in my community?'.

Student Jay Sutherland was applauded as he spoke of how grassroots campaigns had led Glasgow City Council to cancel a so-called "Armed Forces Fun Day". Jane Harries of Cymdeithas y Cymod reported that 16 schools in Wales have now signed up to be "Peace Schools". Sahdya Darr of Quaker Peace & Social Witness urged peace groups to reach out to diverse communities. Contributions from others included reports of creative and effective forms of activism in many and varied places.

The event ended with a performance by radical stand-up comedian Sian Docksey, ensuring an upbeat finish as she expressed her admiration for everyone present engaged in peace activism.

By the end of the day, many people had developed plans and ideas for promoting nonviolence in their own communities, with lots of talk of challenging Armed Forces Day on 30 June. There are already major plans for protests agains the "national" event for Armed Forces Day, which this year will be in Llandudno.

Earlier in the day, the PPU's Annual General Meeting saw the re-election of Albert Beale as chair and Bill Hetherington as treasurer. Others elected to PPU Council were John Andrews, Lucy Beck, Amy Clark-Bryan, Hilary Cornish and Peter Glasgow. Ben Copsey was thanked for his work as he stood down after two years on Council.

As the event came to its conclusion, Amy Clark-Bryan tweeted, "Feeling energised by the fantastic PPU AGM and conference today. Thanks to all involved!"