Pacifists refute claim that they are 'indoctrinating children' with white poppies 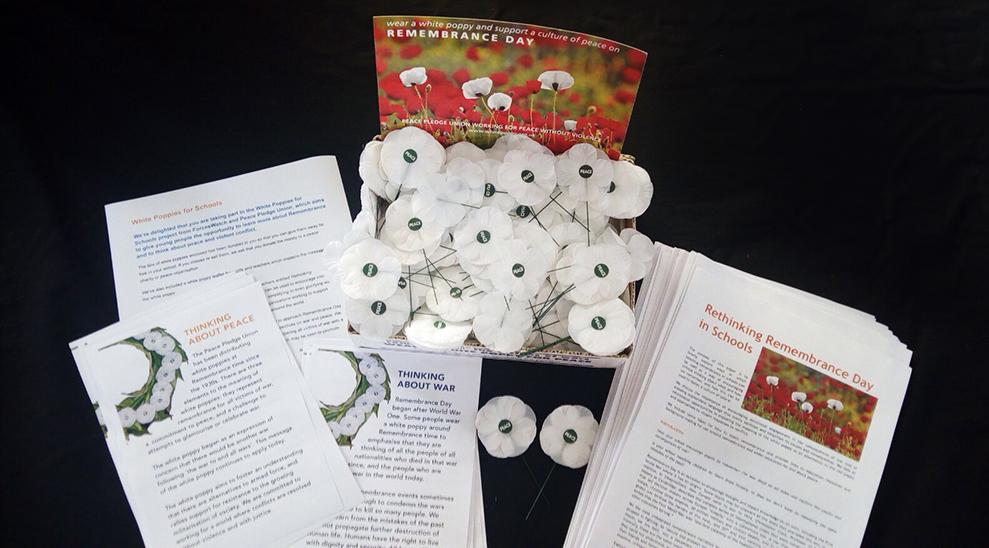 Pacifists refute claim that they are 'indoctrinating children' with white poppies

British pacifists have rejected claims in today's Sunday Telegraph that they are “indoctrinating” children by promoting white poppies in schools. The Peace Pledge Union (PPU) said that the claim – by ex-colonel and right-wing commentator Richard Kemp – was absurd and bore no relation to the facts.

The PPU explained that they want young people to hear a range of different views about war and peace and to make up their own minds about ethical and political issues as they grow up.

The organisation also pointed out that the vast majority of schools that sell white poppies also sell red poppies, thus giving young people a choice and helping them to make their own decisions about the issues involved.

The PPU added that the accusation was particularly ironic at a time when armed forces' visits to schools are on the rise. They suggested that young people who hear a biased perspective are far more likely to hear a pro-military view than a pacifist one.

White poppies represent remembrance for all victims of all wars, a commitment to peace and a rejection of attempts to glorify war. In contrast, the Royal British Legion, who produce red poppies, insist that remembrance should be about only members of British and allied armed forces.

Richard Kemp is quoted in today's Sunday Telegraph as saying that children should hear different views but that teachers should not “indoctrinate” them. In response, the PPU points out that no teacher is indoctrinating children with pacifism. Rather, the PPU's teaching materials and white poppies allow young people to hear different views, something Richard Kemp claims to support.

Responding to the Sunday Telegraph story, the PPU also said that it is inaccurate to suggest that the National Union of Teachers has endorsed the PPU's position, although the PPU is pleased to count a number of NUT members among its supporters.

“It is bitterly ironic that pacifists should be accused of indoctrinating children at a time when military visits to schools are on the rise and the number of cadet forces in state schools has more than doubled in four years. Far from indoctrinating children, we are doing the exact opposite: challenging a one-sided pro-military message and seeking to ensure that young people hear different sides of an argument.

“Richard Kemp defends red poppies on the grounds that they are 'institutions of the state'. This is a worryingly authoritarian phrase. Both red and white poppies are political, representing different values.

“Schools that sell both white and red poppies are helping young people to think through their values and form their own judgements. This is what education should be about.”

The White Poppies for Schools pack is produced jointly by the PPU and Forces Watch. It includes 100 white poppies alongside materials explaining their meaning and making suggestions to teachers. Virtually all schools that provide white poppies also provide red poppies.