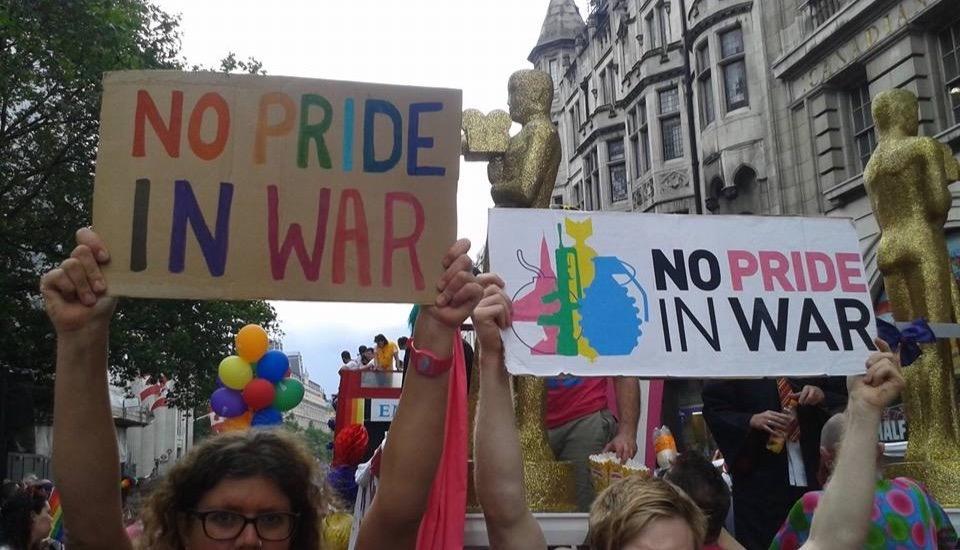 BiCon becomes the first major LGBTQ event in the UK to adopt such a policy. BAE Systems are sponsoring at least three Pride in marches in 2019 (Surrey, Blackpool and Portsmouth), while the army are claiming to be pro-LGBTQ as they struggle to reach recruitment targets.

The Peace Pledge Union congratulated BiCon on adopting the policy, which was passed with 80.6% of the vote at BiCon's decision-making plenary session today (Saturday 3 August).

The decision will add to the pressure on the organisers of LGBTQ Pride marches that have accepted sponsorship from arms dealers. The vote at BiCon comes only a week before Pride in Surrey takes place in Woking with BAE Systems as its lead sponsor. Over 5,000 people have already signed a petition on the issue.

The decision marks a major success for the No Pride in War campaign, which includes the Peace Pledge Union (PPU), Lesbians and Gays Support the Migrants (LGSM), London Bi Pandas, the Campaign Against Arms Trade (CAAT) and others.

BiCon attenders voted to add a clause to their guidelines declaring, "No financial partnership shall be entered into with arms companies or armed forces. For the avoidance of doubt, people employed by such bodies are of course welcome to attend BiCon as individuals, on the same basis as anyone else."

Pro-military organisers of Pride events have tended to respond to critics by saying that no national LGBTQ-related event in the UK has a policy of ruling out all arms trade sponsorship or armed forces stalls. Following today's decision, this is no longer the case.

The No Pride in War campaign has accused BAE and the armed forces of seeking to pinkwash their image even while arming and training the forces of Saudi Arabia, where LGBTQ people are routinely locked up, tortured and killed.

The PPU describes the militarisation of human rights movements as a particularly nasty example of everyday miltarism, whereby military organisations and ideas creep into ever more areas of civilian life.

A number of members of the Peace Pledge Union and London Bi Pandas were present at BiCon today when the decision was made.

"I'm so proud of the bisexual community for this step," said bisexual writer and PPU member Jess Amy Dixon, who took part in the vote. "It's one that I hope many other LGBTQ organisations will emulate. We cannot let these organisations, who profit by directly contributing to the persecution of our queer siblings in other countries, co-opt our movement and pretend to be our allies. I am so happy that today BiCon said no."

The policy was proposed by Symon Hill, a bisexual activist who is also a member of staff at the Peace Pledge Union. "I am very proud of BiCon today," he said after the vote. "The pinkwashing tide is turning. The arms dealers and militarists are on notice that LGBTQ people will resist their attempts to misuse our movement for their own ends. Militarism is rooted in violence, obedience and conformity and can never promote queer liberation."

The Peace Pledge Union and London Bi Pandas have called for protests against BAE sponsorship at Pride in Surrey next week (on Saturday 10 August). Bizarrely, the organisers have said they will not allow "political banners", presumably with anti-BAE banners in mind - even though BAE's own branding will be clearly on display.

No Pride in War campaigns have achieved significant successes over the last year. York Pride, which faced major protests over an army recruitment stand in 2018, involved no military involvement in 2019. Bristol Pride, which triggered a major backlash by accepting sponsorship from Boeing in 2018, made no deals with arms companies in 2019. Meanwhile, Diva magazine removed BAE Systems from an awards shortlist after criticism from the No Pride in War campaign and others.