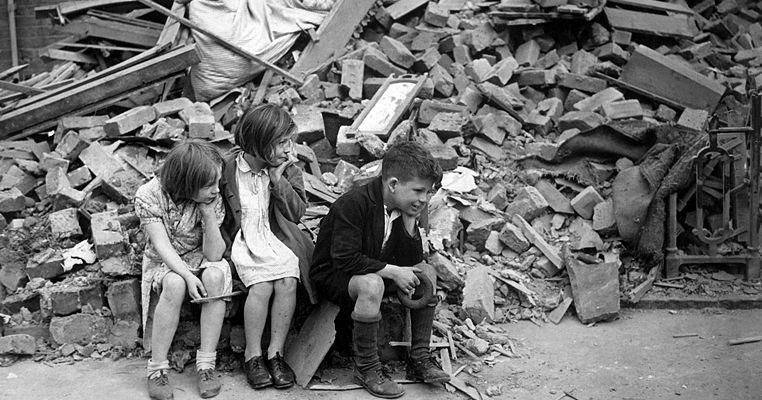 People with memories of World War Two are expressing fear over plans in some areas to sound air raid sirens at events to mark VE Day 75.

The 75th anniversary of VE ("Victory in Europe") Day will be marked tomorrow, Friday 8th May.

Controversy broke out on social media today (Thursday 7th May) after Val, a Lancashire woman who will mark her 80th birthday tomorrow, became alarmed by a report on BBC Lancashire about plans by residents of Penwortham to sound an air raid siren after the two-minute silence at 11.00am tomorrow.

Val is worried that the siren will trigger her traumatic memories of air raids during her childhood in World War Two.

Val's daughter Erika posted about her alarm on social media, making contact with the Peace Pledge Union (PPU), a pacifist campaign group that is calling for the focus of VE Day 75 to be on mourning the dead rather than on parties and celebration.

Since news of the plan broke on social media, the PPU has received a string of concerned messages, including from people who are themselves old enough to remember World War Two and who detest or fear the sound of air raid sirens.

Other plans to sound air raid sirens include in Bangor in Northern Ireland, where Ards and North Down Borough Council are planning to sound an air raid siren during the Clap for Carers at 8.00pm this evening.

The PPU fears that there may be other plans for air raid sirens elsewhere.

In Penwortham, the local councils confirmed that they were not involved with the siren plan, which is organised by private citizens.

“Do these people have any idea what that sound does to people like my Mum? It's no celebration sound!”

“We are continuing to hear from people who tell us that they, or their parents, will be seriously upset or traumatised by hearing an air raid siren. This is what happens when the commemoration of war is turned into a party. Instead of recognising the suffering of World War Two, these plans will traumatise the very people who lived through it. Whatever your views on war, please do not sound air raid sirens to mark VE Day 75.”

Peace Pledge Union members will be joining in the two-minute silence at 11.00am tomorrow, to remember all victims of World War Two. The PPU has said that the anniversary should be about mourning the dead and learning from the past, not jingoism and celebrations that gloss over the horrfic realities of war.

A week after VE Day, the PPU will join with people around the world to observe International Conscientious Objectors' Day. There will be an online ceremony at noon on Friday 15th May.

Visit our VE Day 75 page for more on the Peace Pledge Union's approach to VE Day, both in 1945 and 2020. This includes educational resources for children and young people.