Boris Johnson fuels war in Yemen as world speaks out 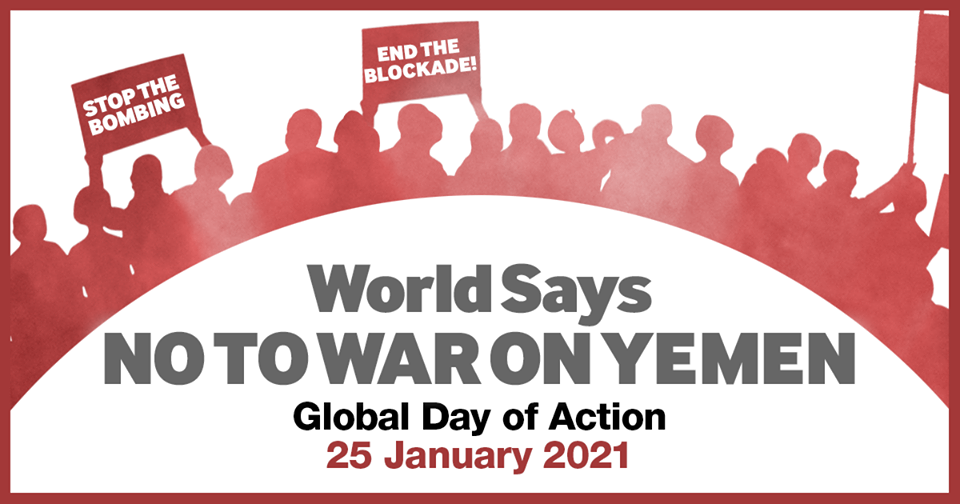 Boris Johnson fuels war in Yemen as world speaks out

Joe Biden, Boris Johnson and other world leaders are under pressure to end arms sales and military support to Saudi Arabia.

Over 300 organisations around the world have signed a statement calling on the world's governments and armed forces not to arm or support the countries involved in fighting in Yemen. They are coming together for a day of action today (Monday 25 January 2021) under the banner "World Says No to War in Yemen".

In the UK, many are demanding an end to British arms sales to countries involved, particularly Saudi Arabia. There are growing criticisms of the use of UK armed forces to train Saudi forces who have killed thousand of people, mostly civilians, in Yemen.

British groups to sign the statement include the Peace Pledge Union (PPU), the Campaign Against Arms Trade (CAAT), the Stop the War Coalition and London Students for Yemen.

The PPU said this morning that the UK is effectively at war in Yemen. They pointed to the use of the UK's Royal Artillery to guard Saudi oil-fields in 2020.

Cautious estimates put the number of casualties in the war in Yemen - which began in 2015 - at over 18,000, with milllions more facing starvation and disease. According to Amnesty International, Saudi bombers are hitting Yemeni schools and hospitals not by accident but as part of a deliberate policy of targeting civilians.

In recent months, the arrival of Covid 19 in Yemen has added further horrors to what the United Nations already described as the world's worst humanitarian crisis.

With much of the world still affected by the Covid 19 pandemic, much of today's resistance will take place online. At 7pm GMT there will be a global rally, bringing together thousands of people in many countries.

Earlier, at 5.00pm, an online event called Students Say No to War in Yemen will be held by London Students for Yemen.

Speakers at both events will include Ahmed Al-Batati, a former soldier who was recently thrown out of the British army for speaking out against the war in Yemen. He was arrested by Royal Military Police for peacefully protesting near Downing Street, in an incident described by the PPU as an outrageous military assault on free expression.

Among those joining today's events will be people in north-west Wales, who last year successfully defeated plans for a new RAF training base at Llanbedr Airfield, with many objecting to the likelihood that it would be used to train Saudi pilots. Local people campaigned against the plan, with support from Cymdeithas y Cymod and the Peace Pledge Union.

The legality of arms sales from the UK to Saudi Arabia currently hangs in the balance. Arms sales were officially suspended in 2019 after the Court of Appeal ruled that the UK government had behaved illegally in its granting of arms export licences to Saudi Arabia. But in 2020, the government claimed to have reviewed their practices and the arms sales resumed. CAAT is now bringing another legal challenge, arguing that arms sales to the Saudi regime break even the government's own limited rules on arms trading.

Opponents of war in Yemen are already taking to social media this morning, with hashtags such as #WorldSaysNo, #YemenCantWait and #StopArmingSaudi. Others are writing to their MP or displaying banners in socially distanced (or even individual) protests.