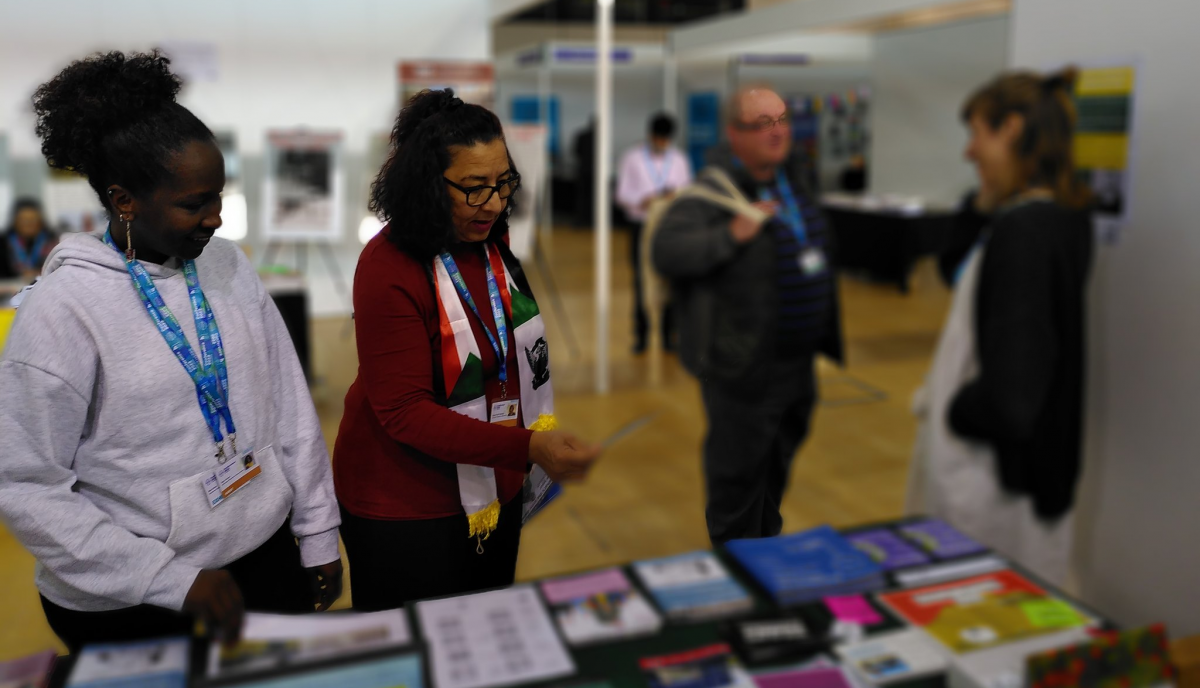 Teachers at a union conference have been visiting the Peace Pledge Union stand to express support for campaigns against militarism in schools.

Peace Pledge Union (PPU) staff and volunteers are running a stall at the annual conference of the National Education Union (NEU) in Bournemouth. The NEU is a union for teachers and school staff in England and Wales. They will be there until the conference finishes on Thursday (18 April).

Since the event began yesterday evening, the PPU have heard from a string of teachers who are alarmed about the growth in recent years of military visits to schools and army cadet forces, as well as arms companies such as BAE Systems running “roadshows” for schools.

The number of cadet forces in state schools in England has multiplied several times over since the UK government launched the Cadet Expansion Programme in 2012. But between 2010 and 2019, youth services as a whole were cut in the UK by over £400 million, according to calculations by the trade union Unison.

Asked to contribute their views to an interactive display on the issue of armed forces in schools, one teacher wrote, “I feel that schools are no place for any army!”. Another simply wrote, “Too much [militarism] in schools already".

One visitor to the PPU stall wrote, “Young people should hear a range of views and not just one side”. Another contribution read, “Armed forces members could have a place in schools to talk about the harms of armed conflict and challenge the glamourisation of war and military.”

A number of teachers expressed alarm at attempts by the armed forces and pro-war politicians to push more schools to celebrate Armed Forces Day in June. The event was invented only in 2009 in an attempt to counter public opposition to wars in Afghanistan and Iraq.

Several teachers told the PPU that they had sought to challenge military visits in their own schools and to ensure that issues around armed force were discussed in an open way so that young people could discuss a range of views as they grow up.

But many also reported that they had encountered opposition, from headteachers, academy chains or local pro-military groups.

Recent years have seen a growth in schools supplying white poppies (which are produced by the PPU) alongside red poppies in the run-up to Remembrance Sunday.

Teachers at the NEU conference engaged PPU members in discussion on topics including cadet forces, racism and the wars in Ukraine and Yemen. They have also been exploring the PPU’s educational resources on issues such as conflict resolution, nonviolent social change, human rights and the links between climate change and war.

One of the first visitors to the PPU stall yesterday evening was Vix Lothian, the Green Party’s education spokesperson. Vix took the opportunity to sign the peace pledge and become a PPU member, saying that she had begun the conference “as I mean to go on”. The PPU members include supporters of many parties and of none.

The PPU members at the NEU conference say they are looking forward to many more important conversations with teachers and school staff before the event finishes on Thursday (11 April).