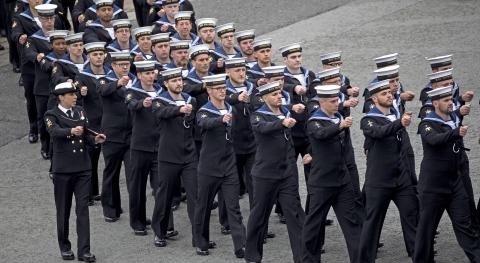 Despite the pandemic and lockdown, the armed forces and the government are still determined to celebrate Armed Forces Day 2020, on Saturday 27th June. Indeed, they are referring to the week leading up to the Day as "Armed Forces Week".

As usual, they are championing "military values" while giving a misleading impression of the what the armed forces do or even the way they treat their own personnel.

In response, we're publishing a Fact of the Day on each day of "Armed Forces Week". You can also read our briefing, 'What's wrong with Armed Forces Day?'

Monday: The UK is the only country in Europe to recruit 16-year-olds into the armed forces

Two years before you can watch a violent film, you can be trained to kill. Around a quarter of the British army joined before turning 18.

Contrary to international norms, the UK continues to recruit 16- and 17-year-olds into the armed forces. While they cannot be deployed to the front line until they are 18, they are trained in preparation for it. Once they turn 18, they are committed to remaining in the armed forces until their 22nd birthday. Thus they are bound for years to a contract they signed before reaching the legal age of adulthood.

The army's leaders claim that they look after young recruits, insisting that they provide a supportive environment at the Army Foundation College in Harrogate, where most 16- and 17-year-old recruits are sent to train. In practice, there were 50 allegations of abuse and ill-treatment at the College before 2014 and 2017.

Armed forces personnel are not permitted to join a trade union, to speak to the media or in public without permission or to stand for elected office. They can be criminalised, and even imprisoned, for relatively minor acts of personal expression.

In almost every other job, someone who wishes to leave can hand in their notice at any time. But members of the armed forces, after their first six months, are obliged to remain in the forces for at least four years. On paper, there are situations in which individuals may be allowed to leave. In reality, these are obscure and rarely put into practice. The SSAFA and At Ease helplines report that the most common questions they receive from forces personnel relate to their length of service, with frequent confusion about the conditions.

In theory, members of the armed forces who develop a conscientious objection to war may apply to be discharged. In practice, this almost never happens and it is not clear if most personnel are even aware of this right. In 2011, Michael Lyons, a member of the Navy, was sentenced to seven months in military detention after he developed a conscientious objection but was turned down for discharge and refused to take part in war.

Imagine being imprisoned because your bosses don't want you to leave your job, even when it goes against your conscience.

Wednesday: The army targets the poorest and most vulnerable people for recruitment

Repeated leaks from the Ministry of Defence and the armed forces make clear that the army is deliberately targeting the poorest young people for recruitment. A document leaked in 2017 stated that their target recruit was "16-24, primarily C2DE. Mean household income 10K." It also listed the cities to target for recruitment - with a focus on some of the poorest populations in the UK. This was confirmed by another leak a year later, which also suggested a deliberate attempt to target young people who are easily influenced.

In contrast to the recruitment of poorer people to the ranks, nearly 50% of army officers have been privately educated. In effect, the army requires people from poorer backgrounds to salute people from wealthy backgrounds and address them as "sir".

Other revelations include the army's deliberate targeting of people who have failed GCSEs - on GCSE results day. At the Army Foundation College in Harrogate, where most 16- and 17-year-old recruits are sent to train, there were 50 allegations of abuse and ill-treatment at the College before 2014 and 2017.

Militarism and poverty follow each other round in circles: the armed forces recruit people from poverty, fuel poverty around the world through warfare and often dump recruits back into poverty when they leave.

Thursday: The armed forces are allowed to run their own criminal trials, police force and prosecution service

The armed forces are the only institutions in the UK that are allowed to run their own criminal courts (courts-martial) separate from the civilian criminal justice system. Armed forces personnel accused of crimes are often investigated by military police and decisions about prosecution are made by the Service Prosecuting Authority.

Imagine if a supermarket manager accused of mistreating junior staff was tried by a jury of managers from his own company, with a director of the company then deciding whether he should go to prison. This is effectively what happens in the armed forces.

The warped priorities of military police and courts-martial have been shown on several occasions. In 2018, a trial of army instructors accused of abusing teenage recruits collapsed after it was revealed that the Royal Military Police had made no arrests for two years after receiving dozens of reports of abuse. They blamed this in part on "more urgent enquiries", suggesting they do not regard the abuse of 16-year-olds as a priority for investigation.

The Service Prosecuting Authority recently reported that they have decided to drop all but one investigation into alleged war crimes by UK troops in Iraq, despite fresh evidence published in the media.

Friday: Less than 13% of UK armed forces personnel have been involved in tackling the Covid 19 pandemic
We are grateful to people who have built hospitals and delivered medical supplies, but the armed forces have kept the majority of their personnel for more conventional military work. While some UK troops were building hospitals in Britain, other UK troops were training the Saudi forces who have been bombing hospitals in Yemen. Meanwhile, during the pandemic, UK troops continued to bomb people in Iraq, to stir up miltary tension by taking part in NATO exercises and to staff nuclear submarines, powerless to tackle coronavirus.
Military leaders must not be allowed to misuse the pandemic to give a misleading impression of the role of the armed forces.
(General Nick Carter stated on 22nd April that 3,000 - 4,000 troops had been deployed to tackle coronavirus, with 10,000 on stand-by. The combined figure represents less than 13% of UK armed forces personnel. The number of 10,000 on stand-by has since been reduced).

Cardiff residents have been backed by peace and environmental groups in resisting plans to sell a park to a museum that promotes the armed forces.