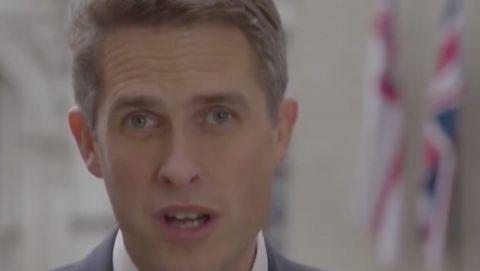 Williamson made the proposals in April 2018, when he was Defence Secretary. He called for the expanding of programmes to provide education with a "military ethos" in "disadvantaged" areas. He also floated the idea of going so far as making some schools "military academies", particualrly in poorer towns and cities.

The number of people contacting the PPU with concerns about militarism in schools has risen significantly in the last year.

The UK government has already spent over 45 million pounds on introducing "military ethos" projects in schools in England. They have funded the Cadet Expansion Programme to create cadet forces in schools across the UK. As a result the number of state school cadet forces has more than doubled since 2012, at the same time as other youth and community services are facing cuts.

The PPU describes the militarisation of schools as a particularly dangerous form of everyday militarism.

While Williamson will be responsible for education in England only, rather than the whole of the UK, the PPU said that he still had enough power to cause considerable damage given his gung-ho commitment to militarism.

As Defence Secretary, Williamson proposed new military bases around the world, contributed to ongoing military tension with Russia and said that the UK should become a military "global power" after Brexit. He also refused to rule out using troops for social control in the event of civil unrest following a no-deal Brexit.

The PPU said that promoting "military values" in schools effectively teaches children to see violence as the ultimate solution to conflict and to obey authority without reference to conscience.

They added that young people should be allowed to make up their own minds about complex ethical and political issues as they grow up, including issues around peace and war. This involves hearing a range of views and perspectives at school.

PPU Campaigns Manager Symon Hill said, "Rather than tackling poverty and supporting well-funded public services, the militarist lobby continues to patronise working class young people by suggesting that their problems can be solved by military discipline.

"Gavin Williamson is one of the most gung-ho militarists in Parliament. He cannot be trusted with responsibility for anybody's education. He tried to interefere in schools policy in his previous job. We will be keeping a close eye on him as Education Secretary.

"We know there are lots of young people, teachers and parents out there who simply will not stand by while education is militarised in the UK. If Gavin Williamson thinks that there is little opposition to his ideas, he will soon be proved wrong."