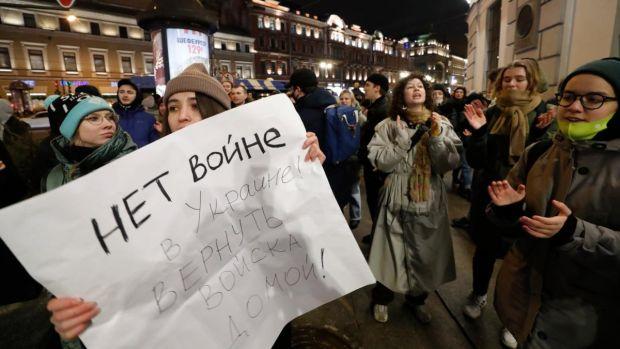 The Peace Pledge Union (PPU), Britain’s leading pacifist group, have written to Priti Patel and Boris Johnson pointing to evidence that hundreds of Russian forces personnel are questioning or disobeying their orders. The PPU has remained in contact with Ukrainian and Russian peace activists throughout the war.

The call to offer asylum comes as events take place around the world to mark International Conscientious Objectors’ Day today (15 May).

The PPU understands from contacts in the Russian peace movement that there has been an increase in the number of conscripts mentioning their opposition to war in Ukraine when applying for exemption as conscientious objectors.

The PPU predicted that an offer of asylum would encourage disobedience among Putin’s troops. They said that if British ministers want to end the war, they need to support people resisting it on the ground rather than sending more and more weapons to Ukraine.

Statements from Ukrainian and Russian pacifists will be read out at the ceremony to mark International Conscientious Objectors’ Day in Tavistock Square, London at 1.00pm today, which will be live-streamed for those who cannot make it in person.

Other events to mark the day will take place in cities including Leicester, Brighton and Edinburgh – and around the world, including in Russia and Ukraine.

The Russian Movement of Conscientious Objectors declared in a new statement:

“In the course of the months of warfare, we have witnessed a totally new phenomenon: cases in which professional soldiers refuse to participate in the special operation and demand to terminate their contracts. We wish to express our special gratitude to those soldiers and police officers who had the courage to refuse to kill and die in a foreign land.”

"There are already hundreds of Russian soldiers who are questioning or refusing orders. If Boris Johnson and his ministers are serious about trying to end war in Ukraine, they should go beyond their gung-ho military rhetoric and step up practical support for people resisting war. We are confident that there would be widespread public support in the UK for an offer of asylum to Russian soldiers who refuse to fight."

"The Russian government is asking young conscripts to join a war of aggression. Any of them who are brave enough to say no to Putin's orders risk jail and should be entitled to asylum."

Mikhail Benyash, a lawyer advising Russian soldiers, said last week that “hundreds and hundreds” of Russian soldiers had contacted his team to ask for advice on refusing to fight.

International Conscientious Objectors’ Day will be marked around the world today with ceremonies, protests and vigils, particularly in countries in which military conscription is in force, including Israel and Colombia. In Helsinki, people will demonstrate for an end to conscription and in protest against the Finnish government’s application to join NATO.

In the UK, events will take place in several towns and cities today to mark International Conscientious Objectors’ Day. At 1.00pm, people will gather in Tavistock Square in London for a ceremony organised by thirteen peace and human rights organisations, including the Peace Pledge Union. It will also be live-streamed. Statements from Ukrainian and Russian war resisters will be read out. Speakers will include Israeli conscientious objector Sahar Vardi, actor Kika Markham and Semih Sapmaz of War Resisters’ International.

The Peace Pledge Union continues to keep up contact with Ukrainian and Russian peace activists. The PPU condemned Russia's invasion as soon as it began.

The PPU supports Russian peace activists, disobedience by Russian soldiers, Ukrainians engaging in mass non-co-operation with invading forces, greater humanitarian aid and support for refugees. The PPU believes that there can be no military solution to the Ukraine crisis and has consistently called for a ceasefire and meaningful peace negotiations.

You are invited to join the Peace Pledge Union and others at 1pm today - online or in person in London - for a ceremony to mark International Consicentious Objectors' Day, or to join in other events happening elsewhere. All are welcome!